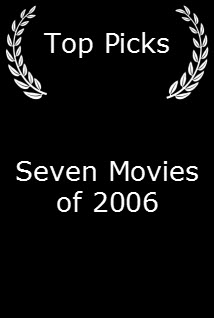 Rocky Balboa  ***
Rocky fans should be pleased. Rocky, Part 6 is a rousing movie that harkens back to the original. And it’s surprisingly good. It’s a preposterous premise, but if you can accept it, Rocky Balboa delivers. Sixty-year-old Rocky has a 10-round exhibition fight at the Mandelay Bay in Las Vegas with the undefeated champion. Remember Rocky is a fable — a fairy tale. Rocky Balboa even has Rocky running up the steps of the Philadelphia Art Museum. And the credit sequence has a horde of actual people on the steps paying homage to the myth and appeal of Rocky. Rocky still honors his wife Adrian who is now deceased. Although he has a paternal friendship with Little Marie, Rocky cherishes the memory of his late wife. True to its roots, Rocky Balboa is fresh and human.

Personal caveat: I grew up in Philly. It’s great seeing the Schuylkill River and rowhouses. I too once ran up the steps of the Art Museum. And I even went inside.

Pursuit of Happyness   **
Will Smith among the Yuppies. Set in San Francisco in 1981, it is oh-so-loosely based on actual people. Will Smith’s actual son, Jaden, who plays his offspring in the movie has a natural quality, although hokum is piled high around him. It’s a disquieting film about a man seeking the American Dream, which assumes the American Dream is to become a stockbroker. However, it should please most audiences. Wall Street west.

The Good Shepherd   ** 1/2
This is a slow-paced, methodical tale about spying and lying. It is about  the founding and evolution of the CIA. Matt Damon plays Edward Wilson, a Yale graduate who was a member of the Skull and Bones society at the university, which leads him to various fateful assignations. Robert DeNiro directs his second film—his first was A Boy’s Tale (1993). It is well-written (by Eric Roth), often interesting, and occasionally intriguing. It has a strong cast, headed by Angelina Jolie as Edward’s unhappy wife, Michael Gambon as a dissolute spy and Alex Baldwin and DeNiro himself as mysterious men of power. The major problem is that Matt Damon’s character is supposed to be a strong. determined man with weaknesses, but he comes off as basically bland. Two hours and 45 minutes of watching Matt Damon—like paint drying—is not going to move a lot of audiences. Where’s Jason Bourne when we need him?

Happy Feet  ** 1/2
There’s something disconcerting about a movie that promotes individuality and spontaneity and winds up with all the penguins dancing as though they’re in a Leni Riefenstahl film. Hello — individuality is not going from one mob to another. Mumbles is cute, Robin Williams is exhilarating and the penguins join the Elks Club.

We Are Marshall  **
Another true story told mediocrity. The tale of the Marshall University football team that in 1970 perished in a tragic airplane crash and the rebirth of the football program and the town of Huntington, West Virginia, is turned into We Are Marshmallow. Director McG said, “The more we took Hollywood out of the movie, the better it served the story.” But Hollywood abounds in all its generic lack of glory. Matthew McConaughey and David Strathairn earnestly give the movie what little energy it has.

The History Boys  **
This is an odd film. Based on the play by Alan Bennett, the film—directed fitfully by Nicholas Hytner—is stagy, stilted and artificial. There are a few moving scenes and some awful ones. Richard Griffiths delivers a coy, fulsome performance as the gay British teacher who faces a new world in which education has become less about truth. Despite Griffiths’ solid acting, it’s better written than filmed.

Apocalypto  * 1/2
The wrath of Mel. Mel Gibson is back doing his Father’s work. If you’re a fan of bouncing, severed heads, and disembodied hearts, this may be for you. This is a film for bleeding hearts — literally. Gibson presents another sadomasochistic gift for Christmas. Happy holidays, Mel.