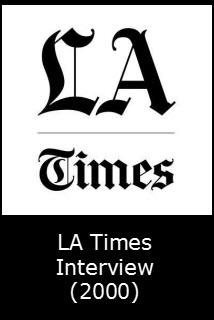 The college professor switched on his tape recorder and began asking questions.

There was American icon John Wayne lamenting how director John Ford "forgot I was around" on their now-classic 1962 western "The Man Who Shot Liberty Valance."

There was Howard Hawks, who helmed such memorable films as "Red River" and "His Girl Friday"--yet only had an honorary Oscar to show for an awesome career--recalling how he and Michael Curtiz agreed to swap movies, Curtiz taking "Casablanca" and Hawks directing "Sergeant York," a fateful decision for both films.

And there was crusty Sam Peckinpah, ensconced in Marilyn Monroe's old living quarters on the Warner Bros. lot, summoning a secretary to bring him a glass of gin as the interview commenced ["No tonic, just soda and lime"], then launching into a blistering attack on the studio.

"The goddamn thing is, they have to be the biggest and most successful thieves in the world," Peckinpah raged, noting that his elegantly violent, 1969 western "The Wild Bunch" cost $4 million, yet Warners was showing a $7-million loss on the movie.

"What kind of bookkeeping is that?" he roared.

The tape recorder clicked off, and Tony Macklin, a part-time film critic who taught English and film studies at the University of Dayton, in Ohio, published the interviews in a quarterly academic journal on cinema called Film Heritage, which he founded in 1965 and edited until 1977.

Now, these revealing question-and-answer sessions, conducted as the old Hollywood was dying and a new cinema was being born, have been collected in the book "Voices From the Set: The Film Heritage Interviews" (Scarecrow Press, $39.50), edited by Macklin and Nick Pici.

The interviews are unusually candid, crusty and revealing, reflecting a now-vanished era when show business and the media were not so adversarial, when access to movie stars was not limited to stage-managed events, and the movies themselves--not box office-- inspired conversation.

It was an era when Scorsese, Spielberg, Lucas and Bogdanovich personified the new wave in cinema then sweeping over Hollywood. But this younger generation also rediscovered and took inspiration from creative geniuses like Hawks and Ford, who left a dazzling legacy working within the old studio system.

Among those featured are film legends like Wayne and costume designer Edith Head; old masters like Hawks and Alfred Hitchcock; Hollywood mavericks like Peckinpah and Robert Altman; and, what was then an emerging new breed of director personified by Martin Scorsese and Alan Rudolph.

While the book is certain to be a feast for film buffs (did Verna Fields really save George Lucas' "American Graffiti" with her editing room cuts? Was Ethan really in love with his brother's wife in "The Searchers"?), Macklin hopes that it stimulates people to revisit old films.

Macklin looks back fondly on those vintage interviews, vividly recalling details as if they had happened only yesterday.

There was actress Shirley MacLaine spilling coffee on him; screenwriter Leigh Brackett ("The Big Sleep") offering him a glass of the most sugary lemonade he had ever gagged over; and costume designer Head making him stand on a pedestal before a mirror, telling him that his then-in-style leisure suit made him look like a "layer cake."

Sometimes, good fortune smiled on the professor. On the day he was to interview John Wayne in 1975, the actor's office was being refurbished, so Wayne invited him down to his Newport Beach house for lunch.

"What surprised me was that when I was there, the magazine Photoplay had just named him the most popular star of the year," Macklin recently recalled. "I would think that John Wayne would be above that, but he was really concerned that he won."

Wayne talked with candor about his films, his screen image, how he got his name, and even his politics.

"They've never made a point of this," Wayne said, "but I have tried never to play the pure hero. I have always been a character of some kind."

Later, he told Macklin: "In every picture that I've done, I've tried to have some human weaknesses and admit those human weaknesses. . . . Nobody seems to realize, speaking of an antihero, I was playing [Charles] Laughton's part in 'Mutiny on the Bounty' in 'Red River.' "

Macklin said Wayne seemed to warm to the opportunity to conduct a serious discussion of his films, instead of patiently listening as interviewers invariably asked if he fought in saloons.

While many critics today consider "The Man Who Shot Liberty Valance" a western classic, Wayne blamed his mentor, John Ford, for saddling him with a bland role.

"Well, 'Liberty Valance' was a tough assignment for me because, dammit, Ford had Jimmy [Stewart] for the [expletive]-kicking humor; he had the Irishman, [Edmond] O'Brien, playing the sophisticated humor; and he had the heavy--you know the dashing, wild, terrific guy. . . ."

"Yes, Christ, there was no place for me. I just had to wander around in that son of a bitch and try to make a part for myself, and he let me, too," Wayne added. "I mean, he just, he forgot I was around. So he made it kind of rough on me."

Macklin met Hitchcock on the set of the director's last film, the campy 1976 mystery "Family Plot." The professor felt that meeting Hitchcock was a little like being granted an audience with the pope.

Macklin wanted to know if audiences deserved more of an explanation for the ending of the 1963 thriller "The Birds." The rotund director replied that he had considered showing the Golden Gate Bridge covered with birds but then reasoned it would be too much.

"In Daphne du Maurier's idea, the birds are all over the world," Hitchcock said. "They're taking over. That's science-fiction!"

One of Macklin's more fascinating interviews was with Hawks. The director had just received a telegram from Wayne congratulating him on the news in Hollywood's trade paper Daily Variety that Hawks was to receive an honorary Oscar for his career.

"Duke, Janie [Jane Russell] and George Raft are the only ones who are still grateful," an emotional Hawks, then 79, remarked.

In one exchange, Hawks related how he came to direct "Sergeant York," while Curtiz got the directing assignment on "Casablanca."

Hawks and Curtiz were having lunch one day when Curtiz mentioned that studio chief Jack Warner had given him "Sergeant York," a story about a rural pacifist who becomes a battlefield hero in World War I. "I've got a story about people in the hills," Curtiz told Hawks. "I don't know anything about them."

Hawks mentioned that Warner wanted him to direct "Casablanca," which he thought was a musical because people "stand up and they sing something about the party."

Hawks said he later told Warner, "Jack, poor Mike doesn't know anything about Tennessee hillbillies," and the studio boss said, "OK, if you guys want to do it."

Hawks, who directed the westerns "Red River," "The Big Sky" and "Rio Bravo," had harsh words for "High Noon" and "The Wild Bunch."

Hawks said he thought "High Noon" was "lousy" because the sheriff [Gary Cooper] "wasn't a sheriff; he wasn't a pro. He ran around like a chicken with his head off asking people to help him. Then his wife, who was a Quaker, saved his guts."

As for "The Wild Bunch," Hawks said: "They've asked me what I think of Peckinpah, and I said, 'Hell, I can shoot three men, get them to the morgue and bury them before he gets one down to the ground.' "

Another colorful interview is with director John Frankenheimer ("The Manchurian Candidate"), who recounted how he had "absolutely no script" when he replaced Arthur Penn one week into shooting on the 1964 World War II action film "The Train," which starred Burt Lancaster.

"I only went to do the picture because Burt Lancaster asked me to do it and because private detectives were chasing me all over Southern California because of my ex-wife--until I realized I was paying for the private detectives, and I had to get the hell out of there," Frankenheimer told Macklin in the mid-1970s.

"I never read the script," Frankenheimer continued. "I was on the airplane, and if hijacking had been in vogue then, the plane would have gone right back to Los Angeles because the script was 320 pages long. The name of the picture was 'The Train,' and the train didn't leave the station until page 180, which was when the picture's over."

Macklin, who this summer left the University of Dayton after a 38- year teaching career, worries that today's younger generation is not even aware of many great films of the past. The 62-year-old educator said he was surprised recently when a college class expressed ignorance of the 1975 film "Nashville," Altman's brilliant tapestry of American life.

"None of them knew 'Nashville,' " Macklin marveled. "After they saw it, I thought they would be provoked, but they found it pointless and dull. I don't know if this is an aberration, but I am afraid it may not be."