It's Personal: Macklin's star ballot boils down to legend, humanity 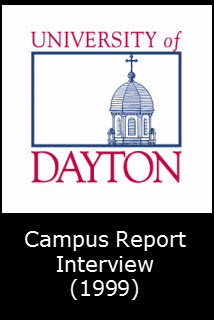 When the American Film Institute announced its 100-greatest-movies list last June during a television special, CBS had its highest Tuesday-night ratings since the 1996 Winter Olympics. Rentals of AFI's No. 1 film, Citizen Kane, jumped by more than 1,600 percent.

This year AFI is choosing the top 100 stars. The 1,800 jurors doing the choosing are, according to AFI, "film artists, critics, historians, executives and other cultural leaders." One juror is UD's F. Anthony Macklin, associate professor of English.

Of the AFI's top 100 films, a dozen were made by directors whom Macklin had interviewed in depth, as a critic and editor of Film Heritage, a periodical that during its run had a paid subscription list that included 800 college and university libraries.

Macklin took his task of selecting stars seriously and personally, as a labor of love. Presented with a list of 250 actors and 250 actresses, he had to pick the top 25 male and the top 25 female legends (as well as two write-in candidates). AFI's criteria included star quality, craft, legacy, popularity and historical context.

The voting results will be broadcast, with a cast of 50 current stars, during a three-hour CBS special in early June. And millions of people will debate the choices of the experts.

Can he defend them against all comers? Maybe not, but he argues, "If you're on a desert island, you have your romance and you have your humor. What else is there?"

More seriously, he says that he especially likes Bergman and Chaplin "because they fought the system. They were artists, personalities, and they opposed politics. Anyone who stands against politicians and stands for art as they did gets my vote."

He adds that he's comfortable with choosing them "because, while they were bigger than life, they were also life. They had a lasting credibility to them. They were myth and reality. They were human."