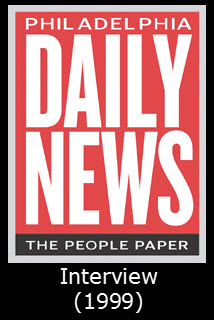 Armed terrorists invade Veterans Stadium, drag the head counsel of the umpires union to home plate, put a bullet through his forehead. The game goes on, played with a spiritual purity. When it ends, the ballpark is evacuated and blown up.

"The story is apocalyptic," explained Tony Macklin, an associate professor of English at the University of Dayton, and author of the bitter, frightening short story, American Pastime, published in last month's North American Review. "At the end, there is light. It's not just razing a stadium, it's about razing a lack of values."

"The story mentions when leftfield was a paradise," Macklin sighed. "For me, Del Ennis was the perfect Philadelphia player I can remember, first game of a doubleheader, he misses a fly ball, three-base error, the Phillies lose. Second game, he hits a three-run homer and the Phillies win.

"I can remember Ted Williams hitting a ball off Arnold Portocarrero that still hasn't come down."

"Ignorance has replaced innocence," Macklin said glumly. "l have DirecTV, I watch a lot of baseball. The more games I watch, the more disgusted I become. Harold Baines, the other night, his team behind in the late innings, the count 3-and-1, he swings at ball four, flies out.

"Ego has replaced competence. Ego, selfishness, arrogance dominate. The game is no longer the priority. Maybe we're purists, maybe we're as extinct as the dodo bird,"

If purists are not extinct, they are an endangered species. If Macklin wants to bemoan the lack of fundamentally sound baseball he watches, that's fine, but his story involves the Phillies, a team that runs hard and plays textbook baseball.

"It's an allegory," Macklin countered. "It could have been any team. Comcast isn't on DirecTV, so I haven't seen that many Phillies games this year, but l know they're fun to watch, and I can't understand the anti-Phillies stuff I hear."

Philadelphia fans may have trouble understanding why he chooses, as a silk-suited symbol of what's wrong with baseball, the head counsel for the umpires? So the umps ignored the dimensions of the strike zone for too many years -- is that any reason to assassinate their head counsel at home plate?

"I hate the story," said Richie Phillips, counsel for the umpires. "The umpires are the real people in baseball. They're accused of being overconfrontational. Of all the major sports, they're the least confrontational, yet suffer the most.

"Basbeball managers are permitted, every day, to run out on the field to gesticulate, to denigrate. Umpiring is the only job where perfection is expected, and every time someone thinks you've made a mistake, they get to scream at you.

"Baseball's ills start and finish with the owners. Most of the owners are driven by greed and ego. They get into constant fights with the players association. They appear to group together, to be tough. Yet, individually, they show no self-discipline at all."

Macklin never mentions Phillips by name. Just describes him as "burly," which he is. But he does spend a huge chunk of the story blaming him for "getting his start" by "signing a college basketball player illegally before his season ended."

"I can remember being at the Palestra when that rumor, that Porter had signed, swept through the stands," Macklin recalled. "As a Villanova fan, I don't want to say he was a Judas, but..."

It's fiction and Phillips is a public figure and he's done enough arrogant things on behalf of the umpires to get Macklin's dander up, but this might be the cheapest of shots.

"I never met Porter, never said 'hello' to him until after that season was over and Pat Williams, who was with the Bulls then, sent him to me," Phillips said bluntly. "I was in the District Attorneys office, working 20 hours a day, working on 450 murder cases, and never saw a game that year.

"Before that season even began, Porter had signed with an agent. During his senior season, he signed with the Pittsburgh Condors. After the NCAA Tournament, another agent was trying to steal him away and the Chicago Bulls were thinking about drafting him.

"Williams asked Porter if he knew [Judge] Leon Higginbotham and he said no. Asked him if he knew the Rev. Leon Sullivan and he said no. He said he had heard the district attorney, Richie Powell, talk at Villanova, where he'd played football and did some coaching.

"Williams called the DA's office, found out that Arlen Specter was the DA. Asked for Richie Powell and they told him there was a Richie Phillips there. He got in touch with me, asked me to represent Porter when the Condors filed suit."

Sometimes truth is more colorful than fiction. Macklin has written a gripping story about the commercialization of baseball. Talk about tilting at windmills. But did he have to blow up Veterans Stadium, even if it does have an ugly artificial turf rug, stained by football yard lines?

"It doesn't mean I'm for destroying the game," Macklin explained. "I want to see it return to innocence. It's my story, it's my dream."