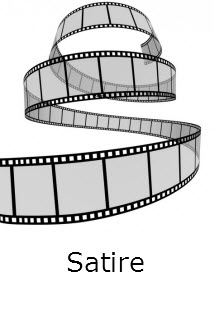 Content by Tony Macklin. Originally published on May 1, 2006 @ FYLMZ.com.

Satire is the wit of society.

When satire is mostly spoof -- such as in recent movie offerings -- the society probably isn't as smart as it should be.

Two movies released in 2006 make one realize how much satire has lost its nerve. Thank You for Smoking and American Dreamz feint toward satire but blanch when it appears they might take any risks.

Thank You for Smoking is a successful spoof; American Dreamz less so. Neither has satire's smackdown. They both leave their targets standing. And, more than their targets, essentially they leave their audiences unscathed.

Thank You for Smoking, adapted from a novel by Christopher Buckley, is the first feature directed by Jason Reitman. It features tobacco salesmanship, but avoids the lungs -- it is a jab in the ribs. It's a pleasant spoof, with a few clever lines of dialogue and a stellar cast. It never inhales.

On the page, American Dreamz probably looked like a winner. It's about a perplexed president and an American Idol-type television show. Two targets allow it to miss them both. How do you satirize a president whose ratings have dropped below satire, and a tv program that is itself farcical? You don't, at least not successfully.

Satire can't serve two masters. Marketing always trumps satire. Perhaps the biggest problem is that a movie such as American Dreamz that so earnestly trumpets product placement (e.g. Pepsi) is never going to take risks. It's all about the foam.

Writer/director Paul Weitz, the writer/director of American Dreamz, says, "I think comedy can act like an anesthetic, so you can talk about relatively painful things and have it be palatable." That's what we need -- more anesthesia!

When is the last satire with its potency intact? Andrew Niccol's Simone -- an underrated satire in 2002, was gentle but still potent. So was Mamet's State and Main (2000). In Christopher Guest's Best in Show (2000) and A Mighty Wind (2003), improvisation often led to self-indulgence rather than sharpness. All four nip rather than bite. They are in the same category as Rob Reiner's much-loved This is Spinal Tap (1984).

The best satires -- those with keen, indelible social criticism -- provoke their audiences. They reveal the human condition and implicate us.

Of especial note is that Network, which won Oscars for actor Peter Finch and actresses Faye Dunaway and Beatrice Straight lost the Best Picture award to Rocky. Satire can only go so far.

Satire is a way of thinking. Some of the best directors of all-time had a satiric bent. Charlie Chaplin was a master satirist. His debunking of Adolph Hitler in The Great Dictator (1940) had a whole world behind it. But that world left Chaplin when he attacked capitalism in Monsieur Verdoux (1947), about which middlebrow reviewers shreiked.

However perhaps the best film critic whoever lived -- James Agee -- praised it. If one wants to read a classic heartfelt, intelligent review, he or she should read Agee's three-parter of Monsieur Verdoux that appeared in The Nation magazine.

Another director who loves to poke iconoclastic fun at the foibles of men and institutions is Robert Altman. In such movies as M*A*S*H (1970) and Nashville (1975) Altman creates very human satires.

Chaplin, Altman, and Wilder all seriously upset the Hollywood industry. They were mavericks. They had nerve and heart -- two qualities in very short supply today.