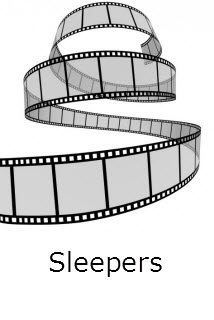 One of the things that keeps a critic from completely losing his mind is the possibility that at any moment he may stumble across a movie that needs him. He can bring it to the attention of some audiences who otherwise wouldn't have any interest in it.

He knows a lot of them will like it if only he can get them to see it.

Occasionally one of these would-be sleepers will take off, and his voice is swept away as part of a chorus of praise. March of the Penguins is an example from last year.

Other times movies need as much support as they can get. The Wild Parrots of Telegraph Hill (2003) was a sweet documentary that needed all the praise and attention it could garner. It didn't have penguin feet, but it could fly.

Often sleepers are for a limited audience. Last year Mysterious Skin was an example of a movie that deserved as much support as it could get. One certainly couldn't recommend it for everyone -- it is a raw movie about the effects of child abuse -- in fact, one probably issues a warning with such a film.

But for an audience that is willing to be challenged, unsettled, and provoked Mysterious Skin is a prime choice. It's scalding but memorable. In it, Joseph Gordon-Levitt gave one of the best performances of the year.

Often flawed films, such as A Home at the End of the World (2004) have a wonderful performance; Sissy Spacek gave one, but few saw it. It was a sleeper performance.

At the moment in theaters is this year's sleeper. It is a French film, with subtitles. That in itself will deny at least half the audience who should see it. The subtitles are irrelvant -- "merde" should not bog an audience down. And French movies at least have some emphasis on character, which is to the good. The reason why audiences should enjoy and like this film is that in this welter of action films, it may well be the action film of the year.

The sleeper, which will attract an audience if it gets any chance, is District B13. It is violence with heart, action with soul. It's generic but has surprises. Its predictable circumstances often contain the unpredictable. It has stylish mayhem.

District B13 is the story of a Paris ghetto in 2010 in which the populace, ruled by gangs, has been walled in. That doesn't sound particularly promising, but it is. There is a kidnapping and "clean bomb" aimed at Paris. This could be a hodgepodge, but it isn't. Even though the action is wall-to-wall, it has a leanness to it. Some reviewers have carped at the dumb plot, but it's not dumb. There's a smartness to it. It moves with alacrity and acuity.

The two leads are Leito (David Belle) and Damien (Cyril Raffaelli). Leito is a vigilante in the lawless district, and Damien is an undercover cop; both want to do good -- one outside the law, and the other within the law. Their chemistry is feisty. The two novice actors have great presence.

Both actors were stuntmen. Raffaelli did stunts in both Transporter and Transporter 2. Belle invented a new martial art form called "parkour," which uses the urban environment of balconies, staircases, rooftops, and other environmental springboards for their acrobatics. Buster Keaton would be proud.

Bibi Naceri, who wrote the screenplay with Luc Bresson who directed La Femme Nikita and The Professional, portrays the powerful drug lord Taha. He may remind one of Tim Roth. Taha is quirky evil -- he kills on whims. Constant whims.

The whole heady concoction was whipped up by Pierre Morel, whose prevous claim to fame was as director of photography on Transporter 2. He uses Rumania to great effect to stand in for Paris, and the French rap music is intoxicating.

Because of the relative inexperience of some of the cast and crew, District B13 has a freshness. But it also has a Hitchockian ability to entertain.

As the credits rolled, I had to climb down off the ceiling of the movie theater. I went home and took a rest watching tv's 24.

If District B13 doesn't play in your neighborhood, seek it out. Put it on the top of your video-to-rent-or-buy list. It's a sleeper keeper.