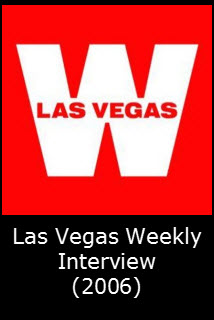 Film scholar, critic and journalist Tony Macklin on his rich past and uncertain future

Tony Macklin is not retired. He may have spent 38 years as an English professor at the University of Dayton in Ohio, he may spend much of his time at sports books and fine-tuning his fantasy football team (he just won his league's championship) and he may or may not have been born in 1937 (it "was a very good year" is all he'll say), but Tony Macklin is definitely not retired. "My first wife, after 22 years of marriage she said—this was in the '80s—she said, 'Well, we can retire and take trips together,'" he says. "I didn't want to retire or take trips."

He didn't. He taught at Dayton until 2000, when he came to Las Vegas for a gambling vacation and decided not to go back to Ohio. Macklin had had enough of university teaching and, in particular, the pressure to produce papers, of which he says, "It never ends. It's an abyss." He wanted to gamble and to escape the cold, but he also wanted to keep doing what he loved, which was writing about movies. After writing his master's thesis at Villanova University on renowned novelist and critic James Agee, Macklin introduced film courses into the Dayton curriculum to mix with the literature courses he taught. "At that time there were no film courses anywhere," he says. "Maybe at NYU and USC and UCLA, but I don't know whether there was a film course in Ohio."

Over the years, Macklin taught a variety of film courses ("I'd almost challenge you to come up with a topic that I didn't teach in film"), spent seven years as the film critic for the now-defunct Dayton Journal-Herald and served as founder and editor of the journal Film Heritage, which he ran from 1965 until its demise in 1978. During that time, Macklin conducted lengthy, in-depth interviews with a who's- who of film luminaries, including Alfred Hitchcock, Martin Scorsese, John Wayne and Charlton Heston.

Those interviews were collected into a book, Voices from the Set, released by Scarecrow Press in 2000. Macklin's position as an early and influential film scholar and critic has afforded him the opportunity to vote in the American Film Institute's 100 Years series of lists (a ballot for the latest, 100 Years, 100 Cheers, honoring the most inspirational films, sits on the floor of his living room) and in the influential British film magazine Sight & Sound's decennial poll of the greatest films ever made (he's voted every 10 years since 1972).

With all his experience and prestige, Macklin figured it would be easy to find work once he moved to town. "I really thought when I came to Vegas, doors would open instead of doors close," he says. Instead, he faced a town where no one knew who he was or cared to find out. He wrote for six or seven months for Las Vegas CityLife, but he and the paper did not make for a good match. "Boy, that was a strange thing," he says, sounding more amused than annoyed. "They would send me to see Pokemon Part Four. That's what I would do. And the editor, who was naïve and young and full of himself, said, 'You can't write.'"

If Macklin's Vegas writing career was brief, his local teaching career was nonexistent; the UNLV film department never returned his calls. Rather than settle into a life of de facto retirement, Macklin sought other avenues for his film criticism. For three and a half years, he was a regular guest on Al Bernstein's show on ESPN Radio 920-AM, until Bernstein left the airwaves a few months ago. "For a segment that was on once a week, it made a very big impact," Bernstein says of Macklin's appearances on his show. "What I really liked was he was in no way snobbish. While his goal was to bring new things to people, I don't think anybody ever thought that there was a mainstream movie that he was going to bash just because it was a mainstream movie."

With Bernstein off the radio because of health problems, though, Macklin's gig vanished, and the only regular print work he's been able to find is at the Fayetteville Free Weekly, in Arkansas, of all places. "I don't want this to come across as self-aggrandizing, but I think I'm pretty good," he says, with more than a little urgency. This is a man who does not want to fade away or to dwell on his past. He's more than happy to promote his book and to share old issues of Film Heritage, but the mementos of his days interviewing film giants are stashed away, covered in plain brown wrappers. There are autographed pictures from Frank Capra and Martin Scorsese and John Wayne (who wrote, "You caught me in print as no one else has."). There's a sketch by Alfred Hitchcock, of his famous silhouette, and one by animator Chuck Jones.

Macklin has stories, too: of taking his daughter to meet John Wayne, of delivering Howard Hawks news of his honorary Oscar, of bonding with Robert Altman over their shared love of gambling. And yet he sits in the living room of his modest apartment on the west side of town, surrounded by a gaggle of stuffed animals that he graciously declines to blame on his wife, and dismisses it all: "One of the things that [my wife] constantly says is, 'You have done a lot. You have done something.' I say I've done nothing." He's not satisfied with where he's been or where he is now. "I'm still active. But it's like banging into walls."

The reason Macklin continues to bang into those walls is that he loves movies, and he loves analyzing them and writing about them. "Going to the movies is a habit, and I need my habit fed by the ability to process and express it," he says. "And when I don't have that, it's so frustrating." To him, criticism is a noble art, one with social value. "I think the best critics—and this is the way I view life—are educators," he says. "The best critics are ones that in their pieces of criticism, you learn something. You go to class with them."

This isn't a surprise, coming from a lifelong professor, and you get the sense that Macklin still has much to teach, if only he could find students beyond the residents of Fayetteville. His love and knowledge of movies are deep and constantly growing; he's as eager to reminisce about actor Huntz Hall, one of the stars of the Bowery Boys films, as he is to talk about his disdain for Noah Baumbach's The Squid and the Whale. He's even written a film script and sent it to a former student who works in Hollywood. "Nobody should write a film script," he says. "It's a lost cause. It's a waste." And yet, he did it, and he didn't stuff it in a drawer.

Macklin still writes fiction, too, after having been published a few times in the North American Review, but doesn't expect much of a result from that either. "When they come back from two publishers, I put them away," he says. "It's satisfying to write, but it's not satisfying to be rejected." He might not ever write the great American novel, or the great American screenplay, but there's a case to be made that Macklin has written some great American film criticism.

Even now, in a town full of people who haven't heard of him, people who don't much appreciate film history or its historians, Macklin is sustained by his love of movies and his dedication to their transformative power. "Unless this country loses its soul and its mind completely," he says, "film will always be a vital form." And as long as he's able, Tony Macklin will be writing about it.