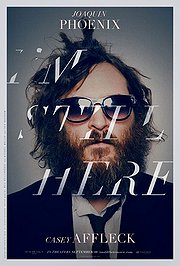 There has been a lot of discussion by reviewers whether or not I'm Still Here is a put-on.

Casey Affleck has made a "documentary" about his addled brother-in-law Joaquin Phoenix and JP's announcement that he is not going to act any more. JP has decided to become a hip-hop writer and performer.

I'm Still Here is a portrait in ego and dissolution. It's fatuous self-importance.

How much of it is actual? How much is a set-up? Even the best critics can only guess. Whether it's a put-on or put-down, Joaquin comes across as a potty-mouthed putz.

Potty mouth is not just metaphoric -- in one scene it's actual.

Whether documentary or mockumentary, I'm Still Here is a stinkumentary.

Either way Joaquin Phoenix -- mumbling, self-indulgent, delusional -- is dull and unpleasant. He's as creative as a clod.

The movie's focal figure doesn't show a whit of talent. It's hard to believe Joaquin received two Oscar nominations -- for Gladiator (2000) and for his excellent performance as Johnny Cash in Walk the Line (2005).

In I'm Still Here he takes the role of the actor who now wants "the real me" to emerge. In better creative hands, that could be witty and interesting. But the boys of Summer -- Casey married to her and Joaquin her brother -- flounder with the concept. Do we really want to see the machinations of a dullard?

Joaquin Phoenix has become the Glenn Beck of acting -- presumptuous and venal.

The two actors who survive the mess of knowing Joaquin are Sean Combs (P. Diddy) and Ben Stiller. Combs is the voice of reason next to Joaquin's voice of babble. He's a rock next to a pebble.

Another actor doesn't fare as well. Edward James Olmos wanders in to give Joaquin some "philosophy," which is shallow but becomes a criterion for the dyspeptic Joaquin. It's something about a cosmic drop of water. Joaquin thinks it sounds good.

Why did Casey Affleck make this movie? Is Casey playing Andy Kaufman to Joaquin's Tony Clifton? Or is he just making a relentlessly unpleasant version of Borat?

The movie may be a goof, and it surely is goofy. One is suspicious about Casey's exploiting a relative. One also doubts whether Joaquin would allow himself to appear as such a jackass if he didn't believe he was making some point. Some of the scenes obviously are set-ups.

At the end, Joaquin travels to his watery roots in Panama to see his father. But the final credits list Tim Affleck (Casey's father) as playing Joaquin's father.

I'm Still Here is a home movie for relatives and masochists. It's the Apocalypse Now of crap.