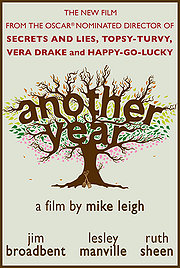 In Another Year, writer/director Mike Leigh serves up Mary (Leslie Manville), a woman who is aging with increasing desperation. She loves full glasses of wine and full cups of whine. She sloshes them both.

A major theme in Another Year is delusion and decline.

Mary is a longtime friend of Gerri (Ruth Sheen) and her husband Tom (Jim Broadbent), and spends a lot of time visiting them. She is a secretary who works with mental health practitioner Gerri.

Tom and Gerri are a salt-of-the earth couple -- both seem to be comfortable in their enduring marriage. They seem to be growing old with dignity and some grace.

Filmmaker Leigh has said he's interested in "what happens to ordinary people." If I want to hear from "ordinary people," I'll go to my local doughnut shop.

Several reviewers have said they'd like to meet and stay with the people in the movie. I'm not sure why. If you identify with these characters, you probably are not going to this movie. The characters probably don't go to the movies.

If I were at a party with these characters, I'd pay my respects, and get the hell out of there.

Leigh has fashioned his formidable career out of "kitchen sink realism," the world of the working class.

Another Year -- a title as forgettable as what happens -- is more about the fridge than the sink. Gerri's is mostly full; Mary's is mostly empty.

Also effective are Sheen as the even keeled Gerri, and David Bradley as Tom's brother Ronnie, who is severe, taciturn, and vulnerable.

Peter Wight is properly disheveled both inside and out as Tom's friend Ken. Ken is heavy with physical weight and self-pity.

Leigh tries to make the dregs aromatic. He fills the screen with music -- many plunkings and a few soarings. Cello, harp and viola versus oboe. The strings stifle the oboe.

At one point Leigh does create a particularly effective shot as the camera slowly goes around the characters sitting at a table. It's as dramatic as a table can be.

So is the movie.