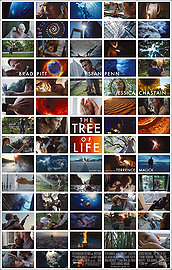 Content by Tony Macklin. Originally published on May 17, 2011 @ tonymacklin.net.

"My name is Terry, and I'm a cinemaholic."

"My sponsor is Michael Cimino."

"Terry has left the building."

"He's also left Texas, the earth, and the universe."

"Can someone speak for The Tree of Life?"

"Is it true that The Tree of Life got booed at Cannes?"

"Yes. But it also got applauded."

"I heard that those who applauded had just woken up from a long nap."

"I don't know about that. But The Tree of Life is about the mystery of the universe and beyond. It's about primordial ooze."

"No, ooze. Beautiful ooze. Don't you know that everything -- even the ordinary -- is sublime?"

"Are you being ironic?"

"No, they're just a quicker way to get to heaven."

"What's the plot of The Tree of Life?"

"It takes place in a small town in Texas in the 1950s. Actually it's even bigger than Texas -- it takes place everywhere. A death in the family makes one son Jack (Hunter McCracken) think back about his growing up in a Catholic family with a hardass father, a sensitive mother, and two active brothers.

"Also somebody thinks about dinosaurs and bubbles, and stuff, explosions and cascading water. Even a butterfly -- isn't that unusual? Can you imagine that -- a butterfly?"

"I've heard that Malick, the director and writer, is reminiscent of Stanley Kubrick."

"Does The Tree of Life have a Starchild?"

"Unfortunately, no. But it has a lot of colors in motion in space. And music."

"Does The Tree of Life have a monolith?"

"It has several. Tall buildings in Houston, you know."

"Does Malick share Kubrick's sense of humans as hollow?"

"No, he thinks beauty is in the eye of the beholder. So he sticks a lot of beauty in our eye."

"What about the cast?"

"Brad Pitt juts his lower lip as the father. He juts a lot. Jessica Chastain, as the mother, likes to splash water. There's a lot of water in the movie. Very visual. Hunter McCracken, as young Jack, looks wary a lot. He has a lot to be wary of -- the mystery of life and all that. Sean Penn, as middle-aged Jack, may have wandered onto the set looking for a bus. The actors do a lot of wandering."

"I'll bet the cinematography is grand."

"I thought the cinematography was done by Rain Man, who took shots of everything -- remember in the credits of that film. But it wasn't; it was done by Emmanuel Lubezki."

"The Tree of Life is a fractured film, so they needed five different editors to put it back together. I heard the original title was going to be The Humpty Dumpty of Life."