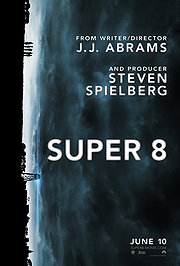 It stretches, snaps, and bounces. It's as elastic as pubescent imagination.

It may be something of a metaphor for the younger days of the two major filmmakers involved in Super 8 -- director/writer J.J Abrams and producer Steven Spielberg.

But Abrams and Spielberg are no longer in the world of sparklers and fire crackers; they're now in the world of Apocalyptic, near-total destruction. No matter how much they may yearn for the days of past innocence, their projects are now bottom line. The once-simple, slightly-wormy apple of youthful filmmaking has been obliterated. It's been replaced on the screen by a splatter of CGI fruit salad.

Super 8 is the story of a group of youngsters in their early teens. Joe Lamb -- ah, get the symbol -- has just lost his mother in an accident. Though obviously hurting, Joe (Joel Courtney) is still helping his friend Charles (Riley Griffiths) make a short film about zombies for submission to a film festival in Cleveland.

Super 8 is set in Lillian, a small town in Ohio. Super 8 was shot in West Virginia, which I suppose Californians think is the same. Spielberg was born in Cincinnati, Ohio, but fled for New Jersey before he was old enough to learn geography. Abrams was born in New York, but raised in California.

So of course Abrams sets his movie in Ohio, because nobody knows where Ohio is. Wasn't Creature from the Black Lagoon (1954) shot in Ohio?

Who cares where it was shot? Wherever Abrams goes there's an alternate universe, just by his being there.

In Super 8 the young filmmakers have been able to enlist Alice (Elle Fanning) as their female lead.

As the pubescent crew are shooting their movie at night outside a small, deserted railway station, a pick-up truck and a train collide, and the conflagration begins.

Thus starts a conflict that doesn't make much sense. Abrams and Spielberg don't ask you to suspend your disbelief; there's no such thing as disbelief any more. Abrams has blown it up.

Abrams doesn't waste much time with character. The military obviously are evil, led by a sinister officer (Noah Emmerich).

The movie's saving grace is in its two young leads. Elle Fanning (Alice) is a shining star in the making. Her smile is worth ten explosions. At her young age, she shimmers with talent.

Joel Courtney (Joe) creates believable chemistry with Elle. He has the look and credibility of a young Patrick Fugit, who was in Almost Famous (2000).

Kyle Chandler and Ron Eldrad are solid in sketchy roles as the fathers of Joe and Alice.

Writer Abrams can't help himself with an act of corny sentimentality when Joe reaches to the heavens at the end. Where Abrams and Spielberg should have blushed, I assume they smiled.

Super 8 is a strange melange: E.T. meets Stand By Me meets Duck, You Sucker.