End of the Year Awards 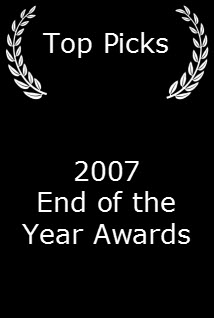 1. The “I Must Never Have Met a Teacher, Because I Sure Can’t Play One” Award

To Robert Redford for “Lions for Lambs”

3. The “Following Fabian to Alaska Without Wife” Award

To Sean Penn, who directed “Into the Wild,” and was deserted by wife Robin

To Andy Griffith in “Waitress”

To Daniel Day-Lewis in “There Will be Blood”

To Julia Roberts, who tried to play a Southern eccentric in “Charlie Wilson’s War”

8. The “I Really Don’t Need to Beat Up Men Anymore” Award

To Jennifer Garner, who was terrific in “Juno”

9. The “I Finally Can Put the Mark Twain Schtik Away” Award

To Hal Holbrook, who was terrific in “Into the Wild”

To Jeff Daniels, who was terrific in “The Lookout”

11. The “I Can Be Forgotten Like Glenn Ford” Award

12. The “What They Made a Movie Without Moi? Impossible.” Award

To Sidney Lumet, who directed “Before the Devil Knows You’re Dead”

To Jack Nicholson and Morgan Freeman, who starred in “The Bucket List”

18. The “Take That, David Bowie, I’m the Real Chamelion” Award

To Cate Blanchett, who was incandescent as Bob Dylan in “I’m Not There”

To Marion Cotillard, who was vulturous as Edith Piaf

To Frank Langella, who gave a deft, memorable performance as an aging novelist in “Starting Out in the Evening”

To “The Kite Runner,” which disappointed readers who loved the novel

22. The “My Next Movie is Narrating the Phone Book” Award

To Morgan Freeman, who is running out of things to narrate

23. The “Half a Good Movie is Better than None” Award

To “Talk to Me,” which fizzled in its second half

To Mitt and Mike

To Will Smith and the modern world