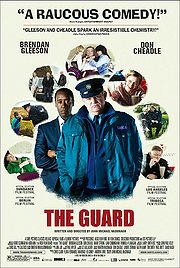 The Guard is a vulgar, Irish treat.

You may not understand Gaelic, but if you understand Familiar-Usage-Concerning-Kilkarney, you'll at least understand every other word in The Guard.

The Guard is the boisterous tale of Gerry Boyle (Brendan Gleeson) a police sergeant in rural Ireland, who plays by his own rules. Boyle says he is "the last of the independents."

He is brusque, flippant, and brash. He lives alone, romps with multiple hookers, swills Guinness, and along with all the other characters tries to break the Guinness Book of Records for using an obscenity.

Boyle also is a good son -- visiting his feisty mum (Fionnula Flanagan), who is in an institution because of her terminal cancer.

As he lumbers around the village and the Connemara Police Station, Boyle eventually is faced with an African-American FBI agent Wendell Everett, from Atlanta. Wendell is in Ireland pursuing a gang of drug smugglers.

Boyle makes Wendell a figure of fun, but he and the black man in the suit come to realize they have important qualities in common, although they are drastically different. They both have intelligence and spirit.

Ultimately they join forces to fight the bad guys.

David Mamet long ago showed that word was exhausted of meaning. Last year a movie -- The King's Speech -- actually brought some life and levity back to obscenity, thanks to its gifted Oscar-winnig screenwriter David Seidler. And Deadwood brought rampant obscenity to the old west.

But what's McDonagh doing? Much of his screenplay is literate and full of allusions -- to Fellini, Dostoyevsky, Bertrand Russell, Dylan Thomas, Kris Kristofferson, et al.

Then there's the omnipresent word.

One might say that people talk like that. Yeah, and they also keep saying, "You know," "I mean," and "I'll tell you what."

One "you know" goes a long way. Writers don't repeat those hoary words.

Fortunately McDonagh is beautifully served by his stellar cast, even when they're babbling the banal word endlessly.

Brendan Gleeson is very appealing as the roguish cop. Don Cheadle and he share great chemistry as they spar and banter. Their repartee is lively and unique.

The bad guys are an odd trio of philosophy, ruthlessness, and sociopathy. Liam Cunningham, Mark Strong -- with his patented villainy -- and David Wilmot give their characters personality.

Many movies recently have ended with contrivance and disappointment. But McDonagh's ending is satisfying. And his choice of the last song is ideal.

But the dialogue of The Guard still is a puzzlement to me.