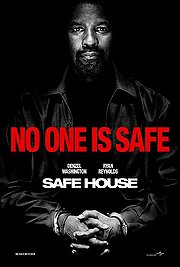 Why would you cast Denzel Washington, and then cut his performance to ribbons?

Daniel Espinosa, director of Safe House, either has a severe, spasmodic problem or a huge ego - or both. He slices and dices like a crazed butcher.

Espinosa employs the 3-second rule, which means he doesn't hold any shot of an actor for more than 3 seconds. For most of the film, this is the modus operandi.

His actors have to express themselves in 3 seconds or fewer. This doesn't give them time for any change or development of an expression.

It's not that Denzel is the only one hacked. The rest of the cast appears only in rapid snapshots. Vera Farmiga is a gifted actress with a lovely face. I like to concentrate on her face and its subtle change of expression. Nope. 3 quick seconds and cut away.

Ladies, Ryan Reynolds does take off his shirt in a bathroom. Look quickly. Oops, gone. The abs are absent.

The rest of the cast of Safe House is first-rate: Brendan Gleeson, Sam Shepard, et al. If you're not going to let them act, then don't cast them. Their names in your movie's credits are not going to give it gravitas.

One character in Safe House calls Tobin Frost (Denzel), "Dorian Gray." I assume it's because the majority of Denzel's acting for this movie is on a portrait somewhere. It's not in this movie.

Safe House is the story of a novice CIA agent Matt Weston (Ryan Reynolds) who is stationed in Cape Town, South Africa, overseeing an unused safe house. He wants to show his talents, but he's stuck there.

Rogue former CIA agent Tobin Frost (Denzel) is caught and taken to the safe house, and all editing breaks loose. Frost escapes, Weston pursues him, and they both are chased by Speedy Gonzalez and some frenzied characters.

Gleeson, Farmiga, and Shepard are along for the dyspeptic ride.

Safe House, with its name cast, is almost a guaranteed success. Denzel and a young actor can make an effective action movie. Unstoppable (2010), with Chris Pine, was terrific. It had supercharged action, but allowed its actors to act.

But the look-at-me director Espinosa - in his first American feature film - shoves his cast aside.

He is enabled by editor Richard Pearson. Pearson, with Christopher Rouse, was co-credited with editing The Bourne Supremacy (2004). But Pearson didn't participate in The Bourne Ultimatum (2007). Rouse did that alone. Good move for the Bourne franchise. Bad for Safe House.

Pearson is back with his anxious shears. Whack and hack prevail. Espinosa and Pearson leave the sets and actors in splinters.

Safe House has a mediocre been-there-done-that screenplay by David Guggenheim, but given a chance to perform, the talented actors could make it work.

The one fortunate thing is that although he's in shards, Denzel is still a strong presence, Reynolds is appealing, and the others are able.

But Safe House is fast finger food. With most of the fingers cut off.

Orson Welles once said that a film is made in the editing room.

It also can be wrecked.