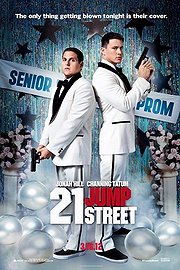 21 Jump Street is a cockamamie movie.

And after the dick jokes there's a load of excrement jokes.

Is it too much to ask for one pun or maybe a clever line?

"Suck my dick" and "I think I shit my pants," ad nauseum, are not exactly what I have in mind.

It's a crapping shame, since 21 Jump Street has a promising hook - two inept cops go back to high school undercover to try to expose a dealer and his source who are selling a dangerous new drug.

High school has changed, but their memories still affect them. They find themselves playing very different roles than they were in the past.

The cast is not only much better than the script - it makes the writing seem especially lame. Jonah Hill (Schmidt) and Channing Tatum (Jenko) have delightful chemistry as the odd couple undercover cops.

Brie Larson has charm as the girl who appeals to Hill's undercover persona. Dave Franco [younger brother of James Franco] - as a campus dealer - keeps the family charisma intact. And Ice Cube is stalwart as the duo's boss.

But all are given ceaseless crudity to say and do.

Screenplays today seem to be the last thing to be considered by filmmakers of comedy. Crudity prevails, and of course there are patented gun fights and myriad explosions. Remember this is a comedy so let's blow up a lot of stuff. If there's any dialogue left, so be it. But if there isn't, we can always go and and write some on a single sheet of toilet paper. Dialogue doesn't matter in comedy; explosions do.

Michael Bacall, the writer of 21 Jump Street, primarily is an actor, who appeared in The Wonder Years. He's had a career as a mediocre actor, which prepares him to be a bad writer. Go get 'em, Michael. But be sure to remember the gunfire and explosions. As an actor and writer, you know how important they are.

Sigmund Freud would have a field day with Bacall's penis fixation - and ultimately defixation. Ah, a small problem.

21 Jump Street is a far-distant, orphaned relative of the glorious Animal House (1978), which actually had terrific dialogue. It was co-written by Chris Miller.

Oh, Number One and Number Two. I could be a screenwriter. I'll start writing.