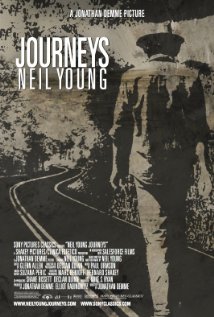 The man's gotten old. He's grizzled and jowly. He's no longer the yearning young poet - once lean and mean. He hulks before a microphone like some old bear.

But then he starts to sing plaintively and ferociously. Years melt away, and past and present are alive.

Neil Young Journeys is the 4th film Jonathan Demme has directed about Neil Young, the Canadian balladeer and rocker. They've done one short and three documentaries. Also they collaborated for Demme's movie Philadelphia (1993), when Demme used Young's song "Philadelphia" at the end. Young's song was nominated for an Academy Award; ironically it was bested by another song in the film. Bruce Springsteen's "Streets of Philadelphia" won the Oscar.

Neil Young Journeys shows that you can go home again - sort of. It features two-night concerts that Young performed in May 2011 at Massey Hall in Toronto, Ontario, where Young had performed 37 years previously. Now 66, Young was 65 when the recent concerts occurred.

Demme's movie opens with Neil Young driving a 1956 Ford Crown Victoria, following another car driven by his brother Bob. Bob is taking them on a sojourn through the area in which they grew up - Omemee, which is circa 90 miles from Toronto.

When he first speaks Young seems like a good ole boy, telling snippets from his youth that aren't very edifying. As a boy, he gave a turtle an early demise and ate tar because another boy goaded him into thinking tar was like chocolate. Not exactly green.

But as he drives and talks we hear the song "Helpless," and the trip gains a dimension.

Young visits sites from his past - a school that was named honoring his journalist father Scott Young, and his homestead, where he tells us he spent summers sleeping in a pup tent watching over his chickens.

Young seems very much the ordinary man talking about the past. Not much rumination.

But loss is present. "It's all gone," he says. "It's still in my head." As are the friends he's lost. At the end, Neil Young Journeys is dedicated to Ben Keith - fellow musician, co-producer, and friend of 40 years. Loss adds to the lamentation. Young suffered a brain aneurysm in 2005, and nearly died himself.

The immediacy is heightened on stage. Young performs an equal mix of classics and recent songs from his Le Noise album (2010). It's a meeting of piercing electric guitar and the lilt and moan of acoustic guitar. He also plays a pump organ, piano, and harmonica.

Why Demme chose to make a third feature documentary is not only to see Neil Young in his home habitat. Demme also introduces new, creative stylistic effects.

The sound is terrific. Reportedly Demme employed a 96-kilohertz sound delivery system, which increases the sound detail and resolution. The low bass booms. The guitars howl. The voice is clear. One of Young's recent songs is "Rumblin'," which is apt for the thunderous sound system.

Demme also vividly shows the past. He utilizes footage from 1970 when four students at Kent State were killed by the Ohio National Guard. In the contemporary world of Columbine and Aurora, one might not be as moved as in the past, but the names in red on the screen and the four images of the winsome Kent State victims, as Young sings, "Ohio," still do strike powerful chords. In that way Neil Young Journeys haunts.

Demme and his artful Cinematographer Declan Quinn rely on close-ups, so Young often is in our face. One blessing is that Demme rarely uses any audience reaction shots. We hardly know they're there.

Demme had a small camera placed on the mike. During the performance it slipped and dislocatedly photographed the mouth and jaw of Young. Demme loved the happy accident and kept the footage during two songs in the movie. The viewer has to decide whether it's happy or just weird.

Spittle on the mike and lens - now, that's real!

What is Demme's affinity for Young? They're close in age - Demme is less than two years older, but it's much more than that. They share a strong sense of justice, creative humanism, and a passion for music and film.

Two lines from Young's "My My, Hey Hey (Out of the Blue)" is a repeat from the original version of the song, "Hey Hey, My My (Into the Black)." It's relevant to both men:

"There's more to the picture

Than meets the eye."

Neil Young Journeys does for some of us what a rare film can do - it revives and renews our spirit.