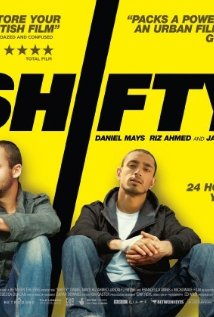 Shifty is low-key, low budget, but high grade. It's a film about sitting and talking. And drug dealing.

It builds slowly - some may want more action, but it has a surprisingly satisfying conclusion.

Shifty is the story of Shifty (Riz Ahmed) and his best mate Chris (Daniel Mays) and their crucial reunion.

Shifty is set in a community on the outskirts of London. Chris visits from Manchester after four years away. He left abruptly out of guilt and anguish. Now he's returned, ostensibly for a party.

Shifty is a Pakistani, who Chris says was "the smartest kid in class - all A's." But now, living with his older brother, he is estranged from his parents and is selling drugs.

After four years Shifty and Chris still have a strong bond. Even though Chris bolted, Shifty stood by him loyally and defended his friend to his own detriment.

Chris has to deal with his past, and Shifty has to cope with a difficult present. One of Shifty's addicted customers mugs him and takes his supply. And Glen (Jason Flemyng), his supplier, is out to defeat him.

Shifty and Chris are side by side. Their unsettled existence is threatened by bursts of violence.

Writer/director Eran Creevy creates a deft paean to friendship. He sets the duo in an environment which is an arrangement of large, looming, bland buildings.

In that antiseptic environment, friendship is challenged and must struggle to prevail.

Creevy emphasizes the pair of friends together. There is a shot from behind of the two men sitting and talking with a tall building between them in the distance.

Another meaningful shot shows the pair conversing in front of a wall covered with graffiti all over it. Another shot is of both sitting and having a conversation. They are silhouetted before a lighted curtain.

Their conversations reveal their friendship. They share humor in remembering shared experiences.

Riz Ahmed effectively plays the title character with furtive eyes that can settle into a sharp stare. Daniel Mays provides nice chemistry as the unsettled Chris.

The music composed by Molly Nyman and Harry Escott has flair.