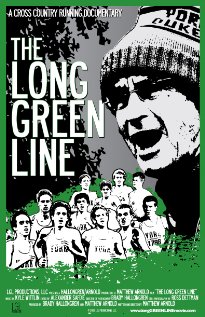 The Long Green Line is a high-spirited celebration of life on a high school cross country team in Illinois.

It's not your average cross country team. It's the York Dukes in Elmhurst, Illinois, who had won 24 state titles, and in 2005 were seeking their 25th.

The documentary, written and directed by Matthew Arnold, captures the vulnerability, naivete, and pretension of youth. He focuses on the student athletes and their irrepressible coach.

76-year old coach Joe Newton is part brash leprechaun and part willful cheerleader. He is a simple man with high aspirations and achievements.

In the past he might be portrayed by Barry Fitzgerald. When Joe delivers his daily "thoughts," he may remind us of Frank Romano in Everybody Loves Raymond. He's a figure of shtick and character.

Over the years, Joe has assembled quite a fiefdom. He has more than 200 "athletes" participating in his program, only seven of whom will be in each competition.

His team is not just a collection of talented athletes, it's an amalgam of talented, not-so-talented, and untalented but committed (one a victim of cerebral palsy).

In 2005 Joe has to deal with crises that threaten his team's success. One of the top seven is expelled for drinking, two more are banished from the team when they are arrested for arson, and his stars - twins - get a debilitating viral infection. How will the team survive?

Arnold's film might have had a stronger dramatic arc, but it does give us a convincing feeling about a unique high school athletic team experience.

Arnold has some clever moments. When the coach mentions that his team finished "one, two, three," we see a runner wearing the number 123.

Arnold also employs a deft technique of showing changes by replacing pictures of players on a background.

The color is arresting. Cinematographer Brady Hallongren's footage is enhanced by colorist Kelly Reese. It is bright and vivid and especially celebrates autumn colors.

The film does have some redundancy. Arnold overuses speeded-up footage until it loses its impact.

The film does, too.