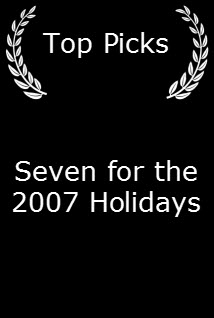 Juno is the feel-good movie of the season. Like an overactive teenager, Juno starts awkwardly, but develops character and grows on you.

It’s the story of a high school girl who gets pregnant and agrees to have her baby adopted when it is born. Not very promising. It’s particularly unpromising when the movie opens with a lot of flippant dialogue and cutesy scenes. Juno (Ellen Page), the pregnant girl, is a rapid-fire weapon of wisecracks. Please give us a break, Juno.

After its heavy-breathing opening, Juno settles into an entertaining, human drama. The actors calm the movie.

And writer Diablo Cody gets off the pole and calms down. Characters start as caricatures and are transformed into human beings. This is especially true of Vanessa (Jennifer Garner), the wife who has a near-obsession to have a baby. she bleats, “I was born to be a mother.” She starts as a one-dimensional Yuppie, with an expensive house, who worries about whether to paint her baby’s room a custard color. But as the movie develops, surprisingly so does Vanessa.

Garner and Jason Bateman (who plays her husband) add verve and credibility to the film. So too do J.K. Simmons and Allison Janney as Juno’s imperfect but loving parents. Michael Cera is his usual decent, unassuming self, as the boy who impregnates Juno.

Jason Reitman, who directed Thank You for Smoking, directs his second film. He has an ability to find the humanity behind the cliche.

But the movie belongs to Ellen Page as the strong-willed, irrepressible Juno. She brims with personality and talent. Her timing saves some of the ripe dialogue she is given. In a role which could easily vanquish her, Page prevails. She makes Juno a memorable experience.

Chick flick alert. I know I’m supposed to care about the intrigue caused by a bratty child in drawing room England. I didn’t. Eighty-eight percent of reviewers (compiled by Rottentomatoes.com) did. And Atonement probably will get an Oscar nomination for Best Pic. I found Atonement a hothouse fantasy. Atonement has highfalutin style — an impressive tracking shot of soldiers on a beach. But this is the sort of film in which the soldiers are artfully posed and have cosmetic blood artfully placed. Keira Knightley (Pirates of the Caribbean) and James McAvoy (The Last King of Scotland) portray the smitten lovers in this fey adaptation by director Joe Wright of a novel by Ian McEwan. Guilt, grief, and yawns abound. Guys, drop off the Significant One at this chick flick, and go see No Country for Old Men (a terrific book made into a terrific movie). You have been forewarned.

The Bucket List is little more than a diversion. Too bad. With high-powered stars Jack Nicholson and Morgan Freeman (who both turned 70 in 2007), this geriatric buddy film should have been scintillating. But the strained writing by Justin Zachham proves again that even the best actors can only do so much with mediocre dialogue. It’s laden with lines such as, “Everyone is everyone.” (What the hell does that mean?) And the pulpy refrain, “Find your Joy.” (It’s in the kitchen cabinet.) Morgan Freeman should take a break from narration. This year’s Feast of Love and The Bucket List run the danger of turning the mellifluous Morgan into a windbag.

This is the second best thing Oprah is hawking this December. She produced the movie, based on actual people and events, about a debate team at little Wiley College in Marshall, Texas, in the 1930s. The Great Debaters is directed by Denzel Washington. Denzel plays the debate coach who also is an activist trying to unite workers in the fields. Denzel is fortunate in finding a youthful clone of himself in Nick Parker, who plays a young firebrand debater. Parker has Denzel’s gestures — wiping his face, scratching his head, rubbing his eyes. The script by Robert Eisele is intelligent — with allusions to James Joyce, Langston Hughes, Thoreau, et al. The Great Debaters is a stirring, pleasing movie that stays just this side of hokum.

Another disappointing adaptation of a popular novel. Kites, kites and more kites.

There Will be Blood

There will be boredom and nonsense. This Daniel Day-Lewis film is an oily mess.

Tim Burton’s slasher musical, with Johnny Depp and Helena Bonham-Carter. If gallons of blood are on your Christmas list, this will be a merry nog for you.