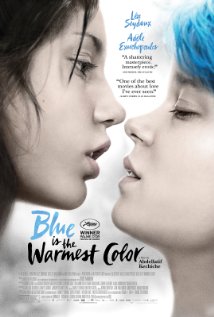 Hitchcock would like what director Abdellatif Kechiche did in Blue Is the Warmest Color.

He made all his audience into voyeurs.

Kechiche's two main actresses say they "simulated" the most intimate moments. Hitch would nod at using the audience's imaginations. But a lot is not left to imagination.

Hitch also might relate unhappily to what Kechiche's two actresses did after release of the film. Lea Seydoux and Adele Exarchopoulos have come out against their director, accusing him of psychological abuse. Hitch probably would have related to Kechiche's bristling response to his actresses. He also would realize that the conflict keeps stoking the media's attention. Some lesbians have also reacted hostilely, accusing the non-lesbian actresses of not being real.

Blue Is the Warmest Color is a cause celebre.

It won the Palme d'Or at Cannes for the film, its director, and its two actresses - it was the first time the award was given this way. Steven Spielberg was on the jury and has become an active booster of the film.

The main reason Blue Is the Warmest Color is provocative is the graphic sexual couplings of the two actresses. They make a vivid "beast with two backs." The main sexual encounter lasts for a voyeuristic seven minutes.

But the French writer Julie Maroh, herself a lesbian, is no Shakespeare. Maroh wrote a graphic novel that put a new spin and rinse on graphic. Her graphic novel - Le bleu est une coleur chaude (2010) - was the story of two young women coming to identity - both sexually and individually.

In the film, Kechiche and screenwriter Ghalia Lacroix changed Clementine's name to Adele, which also is the actress's name, dropped a scene of the duo getting caught, and created a less fateful ending than the book's.

The film begins with Emma (Seydoux) in college, pursuing philosophy and art, and Adele (Exarchopoulos) an impressionable Junior in high school. A glance begins the relationship. They are from different strata of society. Emma's upper class parents eat shellfish, and Adele's scarf homemade spaghetti.

Without the explicit sexual activity, Blue Is the Warmest Color would be just another film.

Its politics are not provocative, and neither is its social criticism.

The theme of coming-of-age is well-done, but it's not worth 2 hours and 52 minutes. The characters aren't that interesting.

Author Maroh is displeased that director Kechiche never invited her to the set and didn't even mention her when he accepted the award at Cannes.

Kechiche's film is dipped in a wash of blue. Blue is the warmest color, and the coldest color, and all the temperatures in between.

Blue is hair coloring, clothing ad bluesium, sheets, a scarf, a sweater, blankets, a cuddly toy, eyes, fingernail polish, a ring. Ocean, sky. When Adele breaks up with her boyfriend, it's on a blue bench.

Late in the film, Adele finally lets red into her life - she wears a red bathing suit and has red lips.

A man says to Emma, "I see the old Emma and the new Emma. Blue and red."

But the audience won't forget those seven minutes.