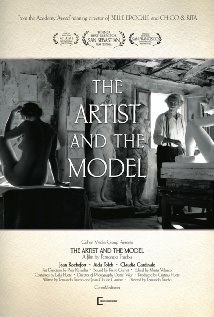 Four months ago, on October 9, 2013, film critic Stanley Kauffmann died in New York City. He was 97.

A month later on November 8, The New Republic published Kauffmann's three final reviews. One was his positive assessment of The Artist and the Model (El artista y la modelo). It's remarkable that Kauffmann wrote the review when he was 97. [This isn't Shattered Glass, is it?] It is a fitting capstone for his phenomenal career.

In the fall of 1962 I interviewed Kauffmann for Film Heritage. I became friends with Stanley and his wife Laura. He gave my daughter a smooth pink stone.

Stanley Kauffmann knew film could be an art form - "Film to me is another art." He was the critic who wrote the best criticism about film acting. That was his special gift.

In his review of The Artist and the Model, Stanley writes that Jean Rochefort, who plays the main character, "has been enhancing French films for decades." Kauffmann comments with a certain wryness, "Seeing Rochefort again reminds us that some film worlds treasure their veterans."

And then Kauffmann makes a meaningful statement about the film's ending, "The sudden finish almost seems meant to make it our responsibility to comprehend the whole."

It's a worthy idea, and offers a beguiling challenge.

Kauffmann - like all great critics - was an educator. He guided his readers down potentially fruitful paths. But he knew they had to be responsible for comprehension. He could only shine light; they had to see for themselves. However, audiences often are drawn more to noise than light.

The Artist and the Model is a French-language film in black-and-white. It has no musical score (take that, Clooney!).

It's a luminous exploration into art and the human condition. The Artist and the Model is the story of Marc Cros (Jean Rochefort), a famous, elderly sculptor, who has become somewhat moribund. He lives with his wife (Claudia Cardinale) and maid (Chus Lampreave) in the rural south of occupied France in 1943 as the war is shifting.

His wife and the maid bring Merce (Aida Folch) a young Spanish refugee home with them, to model for the sculptor. The film explores the artistic sensibility as Cros - falteringly and willfully - tries to find his truth in Merce. He does charcoal sketches - "I have sketches galore" -, an oil painting of Merce standing in water, and figures of clay, prior to the ultimate goal of marble.

Cros sits in various places with light striking him in different ways. When Merce makes a return and stands before him, then moves aside, the light shines brightly on the full face of Cros.

When Merce swims, the light glistens and dances. Water dapples and ripples. When Merce poses and effects different positions, the light fondles her. The ultimate statue is a vision in light. But is it motionless?

Motion may give light life. Cros sits at a café watching walking legs. He sees women's bare legs and soldiers' boots coming the other way. Later, is an erection motion or motionless? Breeze moves bushes and trees, and Merce's hair. Birds soar and scatter.

Nature is one of the main characters in Trueba's film. He and co-screenwriter Jean-Claude Carriere emphasize nature. Cros says, "You can't invent this light." He is drawn to it, "Even the light moves." And he is frustrated, "How do you capture all that?"

He knows how formidable nature is. As Cros tells Merce, "We can consult nature." He says that women are "an emanation straight from nature." Cros declares, "Nature triumphs ... always."

But there's an ominous irony, "Perfection is deadly."

Cros, like Trueba and Kauffmann, says, "Learn to look at things. With attention." Cros shows Merce a small drawing by Rembrandt of a child and a woman in a group. "You can feel her attention on the child."

Merce is moved to analyze the drawing. She learns from Cros.

Cros says, "It's a masterpiece with no pretentions about being a masterpiece." The drawing represents what Cros is searching for. Rembrandt found it. "It's the idea ... he had the idea."

And Cros is in pursuit of the idea. He is fervent but unsatisfied. And then he discovers it...accidentally.

The cast ably portrays the characters. Rochefort is wonderful as the human embodiment of the fallible artist. Aida Folch is engaging as the country girl with a raucous laugh who becomes the muse. And Claudia Cardinale is convincing as the earthy wife who realizes that her husband needs a young model.

I thought of Stanley and his pink stone as I wrote the review about the film.

In The Artist and the Model, art prevails.