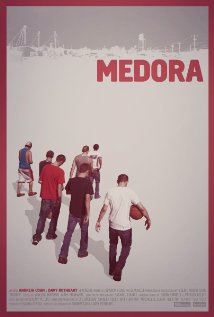 Medora is a poignant gasp at the devastation of small town America.

The sometimes-fascinating documentary - ably shot by cinematographer Rachael Counce - is a bleakly elegiac glance at a disappearing rural Indiana small town. Medora once was prosperous, with inhabitants who were satisfied with their lives.

But now the town is on withered life support, with the plastics factory and brick plant gone, and the remaining 500 citizens seemly trapped in a hardscrabble existence. This is no Breaking Away (1979). Though one cutter tells how Medora once supplied material for the Empire State Building in New York, it is now moribund.

Ironically a teenager wears a New York Mets jersey with David Wright's name on the back, but Medora seems on another planet.

What has kept the small town from expiring is that it has tried to retain a speck of its independence. So far it has resisted having its school swallowed into a consolidated school district. Without this individuality, it probably would completely die, as so many of the other tiny communities have.

Directors Andrew Cohn and Davy Rothbart have focused on the metaphor of the high school basketball team. [The 2010-2011 season]. It's on an endless losing streak. It lost every game its previous season. Medora has 72 students - only 33 of them male. The team often plays schools with more than 500 students. It has little chance of competence; it is trounced. But the town still seems to count on it as a symbol for survival.

The young coach - who also is a cop - tries to mold a motley bunch of teens into some kind of team. He tries to give them a sense of "family." They're inept against any kind of defensive pressure, and seem hapless.

At the same time the team is going through the throes of ineptitude, the boys' families are under severe pressures. Rusty's mother is a drug-and-alcohol addict who is in rehab, and so he lives for a while with a friend's family. But that is ended by the legal system. He's at loose ends that threaten to strangle him.

Dylan has never met his father. He lives with his grandmother. Robby wants to go to technical "college," but he might be unprepared. Logan meets with an army recruiter who offers him what may be his only way out of town.

But the poster boy for lost souls in Medora is Chaz. He is poor and doesn't even have tops on his shoes. He has personality and obviously has potential, but he's become a self-destructive bad boy. It is painful and exasperating to see how much he is caught in a trap with no exit. His life probably is over.

Many of the women in Medora also are trapped. They want a better life for their children, but their own seem over. As one female storekeeper says, the barren town is "closed."

Their hopes have crashed. All they have left is weary endurance.

In some ways Medora is a feel-good film, but it's also a feel-awful film.

As the basketball season evolves, Coach Justin Gilbert does teach the teammates, and they do improve. They handle the ball better, and Rusty becomes an effective big man. But is victory pyrrhic?

Near the end, directors Cohn and Rothbart try to make the climactic game more dramatic by not showing us the score until the end. It is not as close as they try to suggest. This makes one wonder how often they tried for "drama" rather than authenticity.

Basically they create a gripping tale on several levels. It doesn't need tweaking.

We care about the people of Medora.