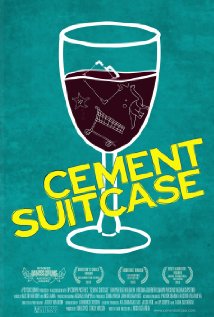 Content by Tony Macklin. Originally published on May 3, 2014 @ tonymacklin.net.

Cement Suitcase is an indie with flair and heart.

It probably shouldn't work as well as it does, but writer/director J. Rick Castaneda also has an active intelligence. He is a smart, imaginative filmmaker.

What separates Castaneda from many indie filmmakers is that he avoids cliches and self-indulgence. The extras seem like natural actors, not friends of the family. There's a rainbow, but it is brief and not hackneyed.

A major asset for Castaneda is his use of stock characters. He does use stock characters - the cheating girlfriend, the guy with whom she is cheating, the distant co-worker, and an intrusive housebreaker. But he humanizes them and makes them unpredictable and likeable.

His target is the human condition.

At the beginning, it may be doubtful that the leading actor Dwayne Bartholomew (Franklin) can carry the film. But he does - with aplomb. He's hefty, almost roly-poly. Some of his facial expressions may remind one of Kenan Thompson (SNL).

The plot is not particularly distinguished. It focuses on Franklin (Bartholomew) a wine salesman in Yakima Valley, Washington. Franklin - the "tasting room manager" - is tired of the routine and familiarity of his life. He thinks his girlfriend is cheating on him, and his job has been dulled by tourists. He's in a funk.

Franklin dreams of "just me and that giddy sense of free fall."

He encounters a few people who jolt him out of his rut.

Cement Suitcase avoids false moments, but occasionally it verges on overkill and changes its tone. When Franklin breaks down and gets drunk, it's awkward. By that time we probably have invested in him, so we are embarrassed for him. But it's still awkward.

The ending is acceptable, but not as imaginative or thought-provoking as it might be.

But basically, Cement Suitcase is an effective feel-good movie. It is feel-good, because it is natural.