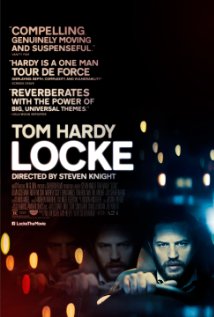 Content by Tony Macklin. Originally published on May 7, 2014 @ tonymacklin.net.

Locke is a special film.

Locke is limited to one physical character alone in a car at night. That is one unpromising concept. But the film brilliantly transcends its seemingly confining limitations.

Ivan Locke is driving in his BMW from Birmingham to London to be present at the birth of a child he fathered on a one night stand. He's a construction foreman, who is supposed to oversee the next day's biggest nonmilitary concrete pour ever in Europe. It's to be the base for a 55-story building, whose owners are in Chicago.

Locke's car is equipped by a hands-free car phone that becomes in ceaseless use. As Locke speeds through heavy traffic, he is inundated with phone calls. His two sons and wife expect him home to watch a major football (soccer) match. His boss expects him to prepare for the pour. After he tells him he won't be there, the boss rejects him. Locke promises that everything will be all right.

A young assistant - whom Locke needs to help him - drinks, and gets desperate on the phone.

But the most desperate is the lonely woman who is about to give birth and is in pain, fear, and dread. The baby in the womb has a troubled umbilical cord, which Locke says is a "life-line or a noose." That's also the life in which he finds himself.

Desperation is all around him. Locke is Job on the motorway.

His life flashes before his ears at night on the road. In the blare and glare of the speeding traffic, Locke tries to cope with his fateful burdens.

Director/writer Steven Knight has captured lightning in a bottle - or at least a BMW. He reportedly made the film for around $2 million, in a brief span of time. Cinematographer Haris Zambarloukos has created a palpable ambience with different angles and reflected light. The editing by Justine Wright increases the vitality. The music by Dickon Hinchliffe is crucial but not intrusive. Locke is an evocative experience.

Knight's style is unique, but also basic to the effect of the film is the writing. The most forced segments are Locke's bitter conversations with the memory of his dead father, whom he detested. But they are apt for his motivation.

Locke helps construct buildings to poetically claim "part of the sky." A highlight of the dialogue is the immortal line, "Two words I learned tonight - Fuck Chicago."

The title figure is compelling. Locke is fallible, but he has integrity. He says, "I made a mistake." But now he is trying to do the right thing. In a world where doing the right thing is way down the list - if on it at all - Locke aspires to being accountable. He may be a disappearing breed, but we relate to him.

Knight unites the old world and the new - honor on the car phone.

Tom Hardy gives a wonderful performance as Ivan Locke. The character is rational, supportive, and at times almost punch drunk. He is given to quick outbursts of fury, but he keeps gripping whatever semblance of control he has left. His eyes fill with tears. He rubs his beard, wipes his nose, and keeps his brain working.

Locke is film as film should be - at least on this rare occasion.