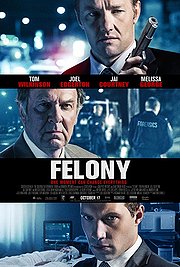 Australia has been an unending source of major movie stars.

The mother lode is still producing.

Edgerton already has made a mark. He played the company owner in Kinky Boots (2005), a squadron leader in Zero Dark Thirty (2012), and Tom Buchanan in The Great Gatsby (2013), directed by fellow countryman Baz Luhrmann.

In Felony, Edgerton has vaulted into the lead role. And something that is particularly notable about the movie is that Edgerton himself wrote the screenplay.

Actors may be the new screenwriters. Actor Ray MacKinnon has created and written seven episodes in two seasons of Sundance TV's Rectify. It is one of the best written shows on television.

Both Edgerton and MacKinnon emphasize humanity and the human condition in their writing. They give actors a voice beyond acting.

Felony is the tale of Malcolm Toohey (Edgerton), a policeman in Australia, who gets involved in an accident while DUI.

A cover-up ensues. Veteran Detective Carl Summer (Tom Wilkinson) gets involved. A young, "crusading" cop (Jai Courtney) is bent on the truth. The trio interacts, but each is not able to keep control. Although the trio are very different, they share in the human condition.

They're caught in a world of unsettling circumstances and swirling morality. What does one do when fate rules?

Melissa George as Mal's wife and Sarah Roberts as a suffering mother artfully expand the humanity.

Director Aussie Matthew Saville keeps his film pulsating. The soundtrack is constantly active - from a tapping pen, to the ticking of a clock, to rainfall, to children romping, to whiskey being poured into a glass, to the clank and wheeze of a life support system. Sound abounds.

A major participant is Saville's wife Bryony Marks, who did the music in Noise (2007), which Saville directed. Bryony is a master of enhancing noise.

Saville begins his film with a shaky camera, but it's just at the beginning to introduce an unsettled world. Mal's life becomes shaken. Saville shows Hitch's influence in a later shot from far above as two cops get out of a car. It's reminiscent of The Birds (1963).

Edgerton writes a smart script that allows for human dimension. As in many substantial films, dualities are significant. Carl says to Mal, "Jesus, the pair of you."

The climactic meeting of the three policemen has the strain of contrivance. Fortunately, Felony redeems that misstep by having a potent image in the closing as a cop stands by his car.

Felony is about the costs of responsibility. Guilt and the will for survival seem universal. Avoiding the right path puts you with others.

Doing the right thing puts you on a solo path.

Felony shows that it's a bumpy road rarely taken.