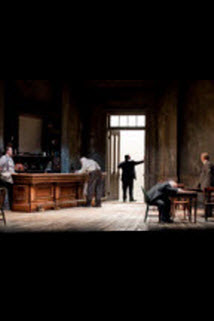 You can't go home again. But some of us sure try.

My latest foray into the future/past was a trip to Brooklyn, New York, in a quest for a meaningful experience.

My destination was to see a production at BAM of Eugene O'Neill's The Iceman Cometh, directed by Robert Falls, starring Brian Dennehy and Nathan Lane. This production had its world premiere at the Goodman Theatre in Chicago in 2012. Now it was in Brooklyn.

Most people seem to dismiss the idea of critics, but my decision to go east was inspired by Charles Isherwood's glowing, engrossing review of The Iceman Cometh in the New York Times (Feb.13). Reviews can matter. Knowledgeable reviews can really matter.

The night before the performance I was to attend, Dennehy and Lane were scheduled for a 90-minute talk before an audience on a Monday, when the theater was "dark." I got a ticket for that.

In the talk, Nathan Lane drove me nuts. He must have said, "You know" 1,000 times - at least three times in one sentence.

But Lane also said that the role of Hickey in The Iceman Cometh was, "the high point of my career."

Lane at times is given to being overly sanguine, so I was dubious, even when Dennehy compared Lane favorably to the gold standard performance of Jason Robards, Jr. as Hickey.

But the next night proved their point.

Lane can rage with Lewis Black, and he seized the role. It was more than a tour de force. It was grueling but shimmering life on stage.

The experience of The Iceman Cometh was powerfully evocative and transcendent.

Seeing Nathan Lane in a performance that few will witness - when millions have seen him on screen - once again raised the concept of an actor who appears both on the screen and on stage.

They are different forms. What does one lose or gain in each? It seems to me that perhaps the stage actor sometimes can't bring the full force of his talent to the screen.

I've always considered the most memorable performance I ever saw Ben Gazzara give was on stage not in films. He was electric in Michael Gazzo's The Night Circus. I saw the preview in Philadelphia. Few people ever saw it on stage; it folded after seven performances on Broadway.

Although Gazzara had a major career in films - highlighted by his brooding performance in Anatomy of a Murder (1959) - he was never even nominated for an Academy Award.

Gazzara never caught the electricity he had on stage. The closest he ever came probably was early in his film career in The Strange One (1957). The Strange One was adapted from a stage play End as a Man, by Calder Willingham and Gazzara reprised his stage role.

I grew up in Philadelphia, which was a major tryout town, so I saw many premieres. I also saw plays in the Hedgerow Theater, the Pocono Playhouse, the Buck's County Playhouse, and of course on Broadway.

On my recent return from Brooklyn, I dug out my Playbills from the far-distant past. They were full of actors that prevailed on both stage and screen.

In Philly, I saw Paul Newman and Geraldine Page in Tennessee Williams' Sweet Bird of Youth; Lena Horne, Ricardo Montelban, and Ossie Davis in Jamaica; Frederic March in Paddy Chayefsky's Gideon; Paul Schofield in A Man for All Seasons; Robert Preston in The Music Man; Claire Bloom in A Doll's House.

I saw Anne Bancroft, Patricia Neal, and Patty Duke in The Miracle Worker. Despite the divine trio of actresses, another actress - who was not on stage - stole the show. I saw her standing in the theatre lobby. Then she walked down the aisle to an ovation as the audience became aware of her presence. The actress was attending the play to consider it for a European production.

It was Ingrid Bergman.

In New York, I saw Gwen Verdon in Bob Fosse's Redhead; Helen Hayes and Kim Stanley in O'Neill's A Touch of the Poet; Tony Perkins in Look Homeward, Angel; and Richard Burton in Equus, with one of my former students as a horse. We were supposed to go out with Sir Richard, but he was indisposed in a bottle.

I never saw Jason Robards, Jr. in The Iceman Cometh. But I saw him in Arthur Miller's After the Fall and William Inge's Toys in the Attic. He was brilliant.

In 1973-1975 for two seasons the American Film Theatre created films of stage plays. It made a film of The Iceman Cometh, directed by John Frankenheimer, with Lee Marvin in the role Nathan Lane later enacted, and Robert Ryan in the Dennehy part. It was a positive, but erratic experience.

Screen and stage came together. Actors were tested.

Film is more frozen. The stage is fluid.

A gifted few are cool in each form.