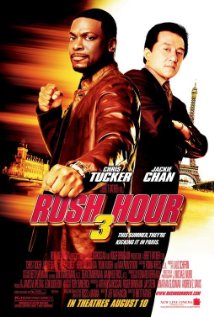 This has been a great summer for movies -- one of the best ever.

Some movies that have excelled in one way or another are The Bourne Identity, Ratatouille, Live Free or Die Hard, The Transformers, and Harry Potter and the Order of the Phoenix.

Rush Hour 3 reminds us of summers of the past when movies were loud and lame -- going thanklessly through stale routines. For critics -- who want more than tired repetition--, familarity breeds contempt. But for a lot of audiences, familiarity breeds contentment.

Fortunately, Users still have director Brett Ratner to give them their fix of mediocrity. Ratner helmed the first two Rush Hours, and he's back laboriously going through the motions a third time. Nothing new in the Ratner camp.

This summer Remy in Ratatouille is the good rat, and Brett is the bad Rat. Both go to Paris, but Brett goes second-class.

Brett Ratner is the poster boy for mediocrity. The action climax on the Eiffel Tower is awkward and predictable. Three different editors didn't help much.

Even the outtakes are weary.

Rush Hour 3 is about how Inspector Lee (Jackie Chan) and Detective James Carter (Chris Tucker) are rejoined on a case to find a murderous secret society. Their pursuit takes them to Paris, France.

The idea that Ratner wastes Jackie Chan is hard to take. Rush Hour 3 has a lot of movement but none of the ingenuity that has enlivened Chan's work in the past.

Chris Tucker is still a one-note actor -- high-pitched shrillness. He's like chalk on a blackboard. Both Chan and Tucker are likable, but their dialogue is lame and renders them noisily impotent.

Jeff Nathanson's script is third rate. He rips off Abbott and Costello's "Who's on First" routine, and makes half-hearted allusions to James Bond. And Nathanson has Tucker shriek inane blather, such as, "C'mon crouching tiger, don't hide that dragon." Where is Rita Rudner when we need her? She used that reference with wit; Nathanson uses it stupidly.

Ratner has always wanted to play with the big boys, and he hires "stars" to try to give his work a patina of class. They can't.

Iconic Swedish director died last month, and Max von Sydow was compelling in his classics, The Seventh Seal and The Virgin Spring. Ratner cast von Sydow in Rush Hour 3 to play the chairman of the World Criminal Court.

Even more hapless is Ratner's casting of Roman Polanski as a French police official that Chan and Tucker punch out.

Polanski directed the classic Chinatown. The original composer on that film Lalo Schifrin was fired and replaced by Jerry Goldsmith. But Schifrin, back for the third time in the series, bided his time, and now he is reunited with Polanski. His music for Rush Hour 3 could be subtitled Lalo's Revenge.

Although much of Rush Hour 3 is in Paris, it's no French pastry. It's more week-old Happy Meal.