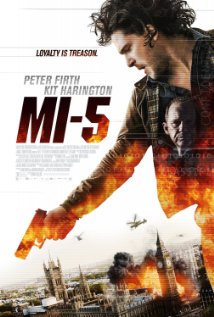 Can an enduring, hardy British television show make it on the big screen?

MI-5 wobbles a bit, but gains energy and should succeed with fans of the show. There are plenty of fans, both in England and America. [I refuse to use the dumb cliché "across the pond." I guess I just did, but with total disdain.]

But most of the main characters in the television show were killed off. Ruth is dead, Adam is dead, Ros is dead, Danny is dead. Tom is gone. Only the organization's head - the indomitable Harry Pearce (Peter Firth) endured.

Now Harry is back.

The plot of the new movie is that Harry is trying to save MI-5 from collapse and takeover by the CIA. He has to go rogue to try to save his beloved organization. What member of the organization is trying to destroy it? A terrorist Adem Qasim (Elyes Gabel) threatens London with a bomb.

MI-5 enlists a young former-agent Tom Holloway (Kit Harington), whom Harry once had decommissioned. Holloway has been brought in to try to find Harry, but Harry seeks his help to stop what he thinks is a plot to ruin MI-5.

Peter Firth still is enigmatic and stolid as Harry Pearce. But he can carry the film. Kit Harington (TV's Game of Thrones) is adequate as the young former-agent. Fortunately, the bad guy is played by an actor on the rise. Elyes Gabel, who portrays the terrorist, is presently the leading character on the successful American television series Scorpion. His face is thinner in MI-5. Gabel recently has put on some weight - heading for Sydney Greenstreet territory?

MI-5 is capably directed by Bharat Nalluri. Nalluri's hasn't directed any film since 2004, Miss Pettigrew Lives for a Day.

The screenplay is thin, but it has a piquant, memorable line. Holloway says, "You can do good, or you can do well." He chooses good.

There are some contrived moments, e.g., a key easily recovered from an unlikely pocket. And the death of a main character is not exactly fresh. But ultimately, MI-5 has some of the patented, gripping intrigue of the TV series.

And it has Harry, who is a rock. Worn down, but a rock.