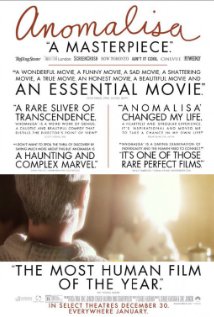 Anomalisa is snide filmmaking. Ersatz creativity. It reeks of therapy.

It has gimmicks galore. It's writer/director Charlie Kaufman at the top of his game. Which means, pretention rules.

Anomalisa - stop-motion animation with puppets - is the story of Michael Stone (voiced by David Thewlis) on a trip to a convention in Cincinnati about customer service. Michael is an author and motivational speaker. Michael is British, living with his wife and son in Los Angeles (the son, wife, and the other characters except for Lisa are voiced by Tom Noonan).

But Michael is burdened with heavy ennui. He is introduced in his dullness, a passenger flying in a plane to Cincinnati. Once there he is greeted by banal conversation from a cabbie, who has asthma - oh, that Charlie Kaufman. And then he has to listen to unctuous talk from the desk clerk and bellhop at his fancy hotel.

We quickly get it - Michael is in a world of banal boredom. People going through rote motions. But don't waste your faith on Michael; he too is on the hapless treadmill of life. He tries with no success to reconnect with a former lover who now lives in Cincinnati.

Then he hears a voice in the hallway, and infatuation is born. He is pleasantly piqued by Lisa (voiced by Jennifer Jason Leigh), who has read the word "anomaly," and poof is transformed into Anomalisa. Lisa and her friend Emily have come all the way from Akron to hear Michael speak. You get it - Akron is nowhere, far beyond Cincinnati. Los Angeles is really far beyond Cincy.

That reminds me of the old word play: Charlie Kaufman is no cunning linguist. Anomalisa begins with a dark screen and a babble of conversation on the soundtrack. As an image of a plane through clouds comes on the screen, we hear one of the voices say, "Kojak not Kolchak." That has the promise that the film will have cleverness and perhaps even wit. None follows.

There are tired jokes: "You can stop now (holding hands on the plane)," and a pratfall when Michael tries to put on his pants in his hotel room. The dialogue is banal. Lisa in the elevator says, "I love to press the button." Michael responds, "Pressing buttons is good, clean fun." Huh, I guess that's the way puppets talk.

Michael says, "Sometimes there's no lesson, that's a lesson in itself." And he ponders, "What is it to be human? What is it to ache? What is it to... be alive? I don't know." Sorry to hear it.

There's the crass nonsense of Michael obliviously getting a used Japanese sex toy as a gift for his young son.

Kaufman even throws some slapdash politics in. Michael abruptly says, "The world is falling. The President is a War Criminal." Where did that come from? Ah, the fertile brain of Charlie K.

Much of Kaufman's shtik is obvious and easy, almost cheap. He makes his audience feel superior, but superior to what? His preening angst seems unearned.

Stanley Kubrick's films were full of characters speaking banalities, but Kubrick was never banal himself.

Anomalisa - co-directed with Duke Johnson - is the second film that Kaufman directed. The first film Kaufman directed was Synecdoche, New York (2008). Both Tom Noonan and Jennifer Jason Leigh were in it. They have returned as voices in Anomalisa.

Jennifer Jason Leigh is in Tarantino's The Hateful Eight. She's also in Kaufman's The Banal Two.

Ann Hornaday, whom I trust, loves the film. But I feel like the last warrior facing the puppet at the gates.

Now we have Kaufman's Anomalisa.