Michael Jackson's Journey from Motown to Off the Wall (2016) 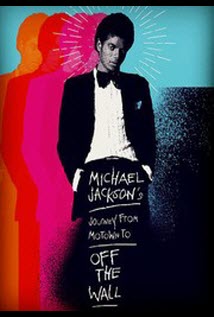 The last decade's treasure trove of documentary films about musical figures and their music has just been enriched. Spike Lee's tribute - Michael Jackson's Journey from Motown to Off the Wall - takes the high ground.

A Spike Lee film without controversy? What a concept.

Lee in his new film has focused totally on the music and talent of Michael Jackson. Michael Jackson's Journey from Motown to Off the Wall is a celebration. And that's worthy.

Spike has taken us back to a time of discovery, exploration, and palpable youth. The spirit of youthful exuberance excitedly breathes throughout the film.

It's not limited to young Michael's journey. In a sense, it's a remembrance of things past for all of us.

In 2012 Spike Lee released a film [Bad 25] about MJ's 1987 album Bad. And he has his future sights on Thriller, which is Jackson's most popular.

But many think Off the Wall is his most influential album. They think it's his best. Journey has an impressive collection of people who tell how Off the Wall was a major influence in their lives - and their careers. Pharell Williams says, "My music would not be here without that record." And The Weeknd in a rare interview says, "I found my falsetto because of Off the Wall." John Legend, David Byrne, and even ballet dancer Misty Copeland tell how they were effected by Jackson.

Michael Jackson's Journey from Motown to Off the Wall takes us back to the germination of the Jackson 5 - they performed in their house when their television set broke.

After a successful run, including a cartoon television show, the brothers left Berry Gordy and Motown and went to Epic Records, where they became The Jacksons. Eventually, almost inevitably, Michael struck out on his own and evolved into a superstar. He was 20 years old when Off the Wall was released in 1979.

But he only received a single win for "Don't Stop 'Til You Get Enough," in the R&B category. He was left disheartened and angry.

I've always been hesitant about calling someone a "genius," but the film reveals a Jackson who actually seems to have been a musical genius.

What separates the master from the merely creative person is total commitment - a commitment that knows no bounds. Nothing stops his or her vision. Michael Jackson was unstoppable.

He loved what he was doing - with an unconditional love. That may seem a cliche, but his love for music, physical movement, and creation was passionate. It demanded his constant pursuit of perfection.

I don't think an athlete can be a genius, but in the film LA Laker Kobe Bryant talks about what his friend Michael and he shared in common. They both "loved" what they were doing with a consummate love. Also, Kobe talks about how Michael changed his life - both on the court and off. He introduced him to a new world. Michael taught Kobe about Fred Astaire, someone about whom he knew nothing. Kobe learned about the world of dance and grace. It effected his performance on the court.

Another piquant interview is with actress Rosie Perez. She is knowledgable about many things. [In the past Al Bernstein had a terrific interview with her about boxing.] In the film, she talks about how much Michael Jackson influenced her growing up, and how she would take a small record player and Michael's records outside with her. He made a lasting impression on her life.

One of the major contributors to Michael's career was composer/musician Quincy Jones. They met for the movie The Wiz (1978). Jones tells about unenthusiastically going to his initial meeting with Jackson and how he was swept up by Michael's talent. Jones produced Off the Wall, Thriller, and Bad. He was a mentor and a fan.

In Michael Jackson's Journey from Motown to Off the Wall, we see a boy becoming a man, a performer becoming an artist. At times he is almost cherubic, such as when he's interviewed at Studio 54, and he's taking delight in the feeling of his surroundings. Soft-spoken innocence of a revolutionary.

We learn of the endless energy and electric talent of Jackson. At one point we're told of how Michael left a recording session. In the hallway he was witnessed dancing. He had to move. He had to dance.

The film also shows Eddie Murphy's classic imitation of Michael singing, "She's Out of My Life," from Off the Wall. And director Lee tells about how he got tickets for The Wiz and asked a girl out on a date. He was turned down, so he scalped the tickets. That's our Spike.

We also experience newly-released original demos that Michael recorded at home, such as "Don't Stop 'Til You Get Enough."

Like the late David Bowie, Michael was dedicated to reinventing himself.

His journey out of youth became a quest.

Michael Jackson's Journey from Motown to Off the Wall shows how much it was joyful.