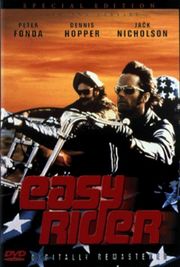 In November of 1968, after I had screened Easy Rider, I had a memorable dinner with director/actor Dennis Hopper, at a posh restaurant in Cincinnati, Ohio - just the two of us.

He turned out to be a wine aficionado. Imagine scruffy Billy (the Kid) was a connoisseur of the grape!

All evening, Hopper kept trying to find out how the movie Head, starring The Monkees, and written by Jack Nicholson and director/writer Bob Rafelson, had opened in New York City that day. [Bert Schneider and Rafelson had produced both Head and Easy Rider.] Unfortunately, the opening was dismally soft.

At dinner that night, wine flowed, as did Dennis.

Reflections on a conversation with Dennis Hopper.

Available in PDF format at this link.