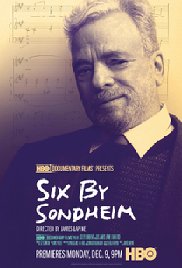 Each year I try to pick a movie that I can recommend to nearly everyone. It's not an easy ambition.

I especially want to select a movie that most people don't even know about. I want to promote a hidden treasure.

At this time last year, I was smitten by Lambert and Stamp and The Wrecking Crew. Few had heard about those two films, but after they found out about them many enjoyed them.

So far this year, I've been backing Elvis and Nixon - for a particular group of moviegoers - and the British documentary Dark Horse for everybody.

In the last few years, documentaries about music and its practitioners have been gold.

But I just came across my hidden gem for 2016. I'm late to the party. The documentary Six by Sondheim was released in 2013 on HBO. Fortuitously, I came across it recently.

Six by Sondheim is an intriguing, human portrait of a man and his music, and if you care about creativity, you probably should seek it out.

James Lapine has assembled an engrossing, engaging bunch of interviews with lyricist/composer Stephen Sondheim - many of which appeared on television over the years.

He's artfully embellished them with footage of theatre performances, rehearsals, and a recording session for an album with the original Broadway cast of Company, with Elaine Stritch in front of a microphone with a sparkle in her eye.

And perhaps the most fascinating sequence is Autumn de Wilde's on "Send in the Clowns." For those who love creativity, it's a primer.

For whom was the song written? Did Judy Collins write it? No. Was it written for her? No.

"Send in the Clowns" was written by Stephen Sondheim for Glynis Johns in A Little Night Music. Sondheim explains that Glynis Johns had a voice that was "sweet" and "bell-like." But she was "breathy" and "short-winded."

So Sondheim wrote the song with short phrases and pauses. And it was brilliant.

"Send in the Clowns" was not an immediate hit, although it eventually became the one hit that Sondheim had as a single. First Bobby Short sang it. Then Judy Collins and Frank Sinatra both recorded it, and Collins' version became a popular smash.

Sondheim as a boy was salvaged by the father of a friend who lived down the street. He was Oscar Hammerstein II. The Hammersteins became his substitute family.

"One afternoon he taught me everything I knew," Sondheim avows. "I probably learned more that afternoon than I have the rest of my life."

Sondheim also tells about a letter he received from his mother - it's a shattering moment.

For Stephen Sondheim, Oscar Hammerstein seems to have been a mentor all of us are looking for. Near the end of his life, Hammerstein wrote an inscription for Sondheim, "For Stevie, my friend and teacher."

The pupil had taught the mentor.

Essentially Sondheim sees himself as a teacher. "Teaching is making a child curious," he says. "That's all it's about.... I love teaching. Any form of communication is teaching.... Teaching is a necessity. I couldn't live without it."

Stephen Sondheim is now 86 years of age. He's been a wordsmith, an observer, a creator, an artist, and a teacher. Six by Sondheim shows Sondheim as a consummate human being.

But who are the clowns?

Are critics the clowns?