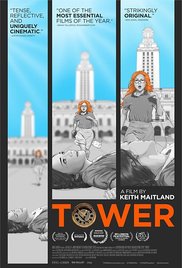 Tower - for most of its length - is a brilliant, human drama.

Maitland creates the world of August 1, 1966, and its shocking violation. His film captures the horrible, chaotic atmosphere when a sniper began shooting from the top of a tower at the University of Texas in Austin.

Tower relives the massacre of 14 people - 32 more were wounded. The killer (no need to mention his name) had begun his lethal binge by killing his mother and wife. Then he went to the Tower.

Tower offers redemption for the survivors who have lived for 50 years without it. Guilt abounds among the survivors. One cop feels he could have saved more if he'd acted earlier. He looks haunted. A man and his cousin are reunited by the filmmaker. They hadn't seen each other in nearly 50 years. Their reunion is heartfelt and healing.

The central figure in the film is Claire Wilson, who was a pregnant 18-year-old young woman, who was shot and lay out in the open on the hot concrete, facing death by the corpse of her boyfriend. She couldn't be rescued, because any attempt would surely end in the death of any potential rescuer. Her ordeal is at the center of the film.

The best, most affecting quality of Tower is the acts of personal bravery. They are monumental.

Maitland creates the reality of a shattered and gone world. The killer is referred to as a "sniper," not a "terrorist." The police don't have the weaponry or experience to deal with the chaotic situation.

A few months before the assault, my father-in-law was a visiting professor at Austin. It was a place of art and creativity. It crashed into horror and shame.

The attack at Austin was senseless. At that time, it was unfathomable.

In 2017 it's almost familiar. Anderson Cooper would be on a plane to Austin.

Sandy Hook was the point of no return. A lot of the reaction was craven. The children of Sandy Hook were the final pawns in a callous game.

If Sandy Hook wasn't a moment of truth, how can there ever be one?

Whatever comes, we now live in a gun culture. Today customers carry handguns into the doughnut shop I frequent.

On all issues, politically my side are mealy-mouthed, venal wanna-bes. Spinning empty gun chambers.

For most of its length, Tower is an anthem to the best of the human spirit. It speaks to all of us. It makes its points subtly.

But at the end, Tower veers into political blatancy. It becomes propaganda. It relates Austin to Columbine, Virginia Tech, and Colorado. The audience can make those connections. It doesn't need to be shoved.

I could hear half the audience switching stations on their TVs (Tower recently was shown on PBS). Red States were abandoned.

Tower enlists our humanity, and then preaches to us. That cheapens what has come before.