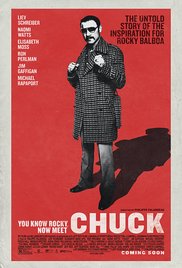 Content by Tony Macklin. Originally published on May 28, 2017 @ tonymacklin.net.

Liev Schreiber is at the top of his game as the fighter known as the "Bayonne Bleeder," on whom Sylvester Stallone based Rocky Balboa.

Schreiber effectively humanizes the man who reached giddy heights - lasting almost 15 rounds in the ring with Muhammad Ali -, became identified with a famed movie character, and then plummeted into woeful self-destruction. He had to come to grips with it all.

The first portion of the film is upbeat, but as Wepner's deterioration turns troubling and ugly, Wepner is faced with dealing with his downfall. The audience has to share the disheartening experience.

Schreiber captures a human being who at times can be smart and charming; at other times he's dumb. He has depths and shallows. Wepner is a regular guy who lacks self-discipline. He's a likable punching bag.

In Chuck, Wepner says that Requiem for a Heavyweight "broke my heart - that movie. You see yourself." Chuck even parrots some of Rivera's movie dialogue.

Director Phillippe Falardeau gives his film a lot of the ambience of the 1970s. The television sets are small - Chuck watches Kojak on tv. There's an outdoor phone booth.

Chuck is reminiscent of some films of the 1970s - the Golden Age of American Cinema. It is personal and is steeped in alienation. Its imagery creates a feel of the authenticity of past times.

The screenplay credited to three writers, with input from Schreiber, has some sharp dialogue. Two of the best conversations are in a diner and in a car. In the diner sequence, Chuck's wife Phyliss (Elisabeth Moss) suddenly joins Chuck and a woman he is charming in a booth. She gives the young woman a history lesson of her husband's chasing and cheating.

The later scene in a car has Chuck's brother (Michael Rapaport), his brother's wife, and Linda (Naomi Watts) - who has gotten the brother to post bail - and a quiet Chuck. It's a revealing sequence.

Both scenes have effective dialogue rendered with power by the talented cast.

Although Chuck has a tours de force performance by Schreiber, the rest of the cast give him capable support. Elisabeth Moss is convincing as the long-suffering wife, who is vulnerable but also tough. Naomi Watts portrays a bartender, who won't submit to a married man. One of the ironies of the casting is that last year Schreiber and Watts ended an 11-year relationship that produced two children. Such is image and reality.

Also credible are two young actors who play the young Stallone (Morgan Spector) and Ali (Pooch Hall). They have the voices if not the bodies.

The film begins with a quote from Rocky Balboa that seems odd and somewhat insignificant - "Hey... who cared about me yesterday, huh? Nobody."

But identity becomes a major theme in Chuck.

In one scene Chuck is driving in a car with his manager (Ron Perlman), and his buddy (Jim Gaffigan). They enthusiastically sing along with the song playing on the car radio, "You Ain't Seen Nothin' Yet." It's an anthem for Chuck.

At the end, Chuck throws away an actual photo in a telling symbolic gesture. We then see the real Chuck Wepner as he walks on a New Jersey boardwalk.