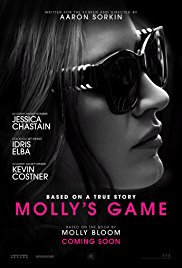 Molly's Game is Aaron Sorkin's ante in the game of directing.

It is Aaron Sorkin playing a game that isn't his forte yet. He's a writer par excellence, but this time he also directs, without the ability he usually exhibits as a writer.

When Sorkin has a humanist director, such as Rob Reiner in A Few Good Men (1992), his language prevails. Sorkin originally wrote A Few Good Men for the stage, and it was on Broadway (1987). As a film director, Sorkin is no Reiner.

In his adaptation of Molly Bloom's memoir, Sorkin in his screenplay provides some good lines and effective scenes, but he seems too distracted to provide sufficient motivation for Bloom.

Sorkin seems less concerned with clarity and motivation than with setting up shots. He haphazardly emphasizes the major theme of honor. At times, it's almost an afterthought.

Sorkin also commits the plot shtick of contrivance. Molly's father (Kevin Costner) suddenly appears at an outdoor skating rink in New York, where lo and behold she is skating for the first time. Contrivance, anyone?

Sorkin's focus is blurry. Molly's Game breaks in two. One part is a tale of the evolution of a young competitive skier with a dominating father. The other part is a tale of a woman who becomes a major hostess for high-limit poker games, who faces the onslaughts of enemies and the legal system. The two parts don't cohere. They could, but they don't. Three editors try to unjumble the two competing films within Molly's Game, but they remain an uneasy combination.

Molly's decision to be unconditionally honorable is like a card dropped on the floor. Sorkin doesn't really prepare us for that. Molly's many voiceovers don't either.

The acting is strong in Molly's Game, but has its obstacles. Jessica Chastain is able as Molly, but her role seems to be being redefined throughout.

Sorkin could take a lesson from I, Tonya, which blends competition with the personal. And, although Chastain's performance as Molly Bloom, is apt, it's blown away by Margot Robbie's as Tonya Harding.

Molly's Game is like calling a poker hand with two pair. It could win, but it doesn't have the nuts.