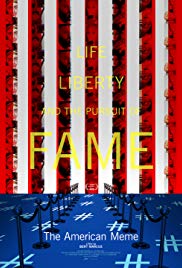 The American Meme is a vivid look into the world of contemporary icons.

Not the icons of movies or the art world or big business.

Social media icons are front and off-center in The American Meme. It is an insightful, penetrating look into the world of some social media icons. It deftly explores their humanity. Both bright and dark.

The 21st century is a Brave New World. Social media rules. Social media is the rage. Its existence helps explain the election of 2016.

The American Meme is a fascinating, revelatory look at the wizards behind the curtain of the web.

Bert Marcus, director of the upcoming Netflix documentary, has been able to capture the humanity behind the sometimes outrageous posing. It is ironic how human the falsity can be.

The most successful of the social media figures were committed to their persona and branding. Outrageous behavior increased their celebrity. But behind celebrity, there are human beings.

People who are obsessed with ego, persona, and branding do not fit the norm. And because they're creating quicksilver images, they often are seen as facile products not actual people.

Marcus remedies that perception. It may surprise those who think of them merely as insensitive, banal, degrading exploiters, that they are much more.

The social media icons in The American Meme all seem to be in on the joke, but they also realize it's much more than a joke.

The figures in The American Meme are smart, perceptive, and often vulnerable.

On first encounter one might think that Paris Hilton is as non-cerebral as her puppy. But she was the most iconic of the icons. She was the gold standard.

At first Paris seems superficial, talking about herself and her fans. But she has a genuine quality, and one can see how she reaches her loyal fans. Paris says, "I have over 50 million followers on my social media." She and her "family" of fans see it as love.

She says, "They just genuinely love me." Love with 50 million people - that's a lot of "love."

She has other iconic company. Her mother, who was a friend of Andy Warhol, says, "She was what he would have loved." And Paris says of some reactions, "Comparing me to Jesus is a real compliment."

All of this may boggle the mind, but it shows the vast influence of social media. Paris has an appealing quality that transcends absurdity. She often is more vulnerable than egotistical. She also has a savvy business sense.

She is no stilted figure. Other social media icons are equally articulate. Brittany Furlan, Josh Ostrovsky -@TheFatJewish, and Kirill Bichutsky -@slutwhisperer, share Paris' quest for attention. And there are others.

The best part of the film shows the joy, excitement, and fresh spirit of the aspirants. It comes with a dose of coarseness. Kirill, the outrageous photographer, says "I play to the lowest common denominator. That's the way you get the most." He explains his strategy, "I need instant gratification."

TheFatJew was validly accused of being a plagiarist - which a horde of less successful followers use as their modus operandi. He says he does "cultural commentary," which he declares is "A new kind of art." That it's art is a dubious claim. It's crafty entertainment for a particular audience.

Since the quest is for fame, the end justifies the means. One icon says, "You go to a school and say, 'What do you want to be?' They say, "Famous.""

Another talks about Paris' "100-day plan to being famous."

Ultimately, the cost of fame is not uplifting.

What the icons often share is that they had a troubled childhood, e.g., Brittany was a cutter. She went from Perkasie, Pennsylvania to Los Angeles in search of fame. But she found success on Vine, which was a site that had 6 second videos. For a while she was the most followed personality on Vine. It wasn't to last.

The latter part of the film is predictable. Champagne is replaced with a slap of cold water. The ending is surprisingly abrupt and has little build-up.

The social media superstars have lost their fervor and their energy. Several of them have lost hope. Kirill says, "I just hate people." Unmarried, tired, and displaced, he's in Limbo. where fame has led him.

Paris says, "It's like Groundhog Day. All the same shit. Not real life at all."

But The American Meme shows it was a hell of a ride.