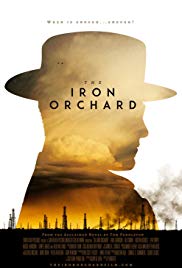 What often separates the effective indie films from the ineffective ones is credibility and actors with personality.

They seem to be rare qualities.

The Iron Orchard is a facile indie. It's lacking in credibility.

Set in the oilfields of Texas from 1939 to the late 1950s, it relates the rise, fall, and redemption of Jim McNeely (played by the bland Lane Garrison).

Most of the events are too sudden and skimpily motivated.

Jim faces up to his crew boss (Gregory Kelly) - suddenly. Maybe he ate some spinach - the boss is like Popeye's Bluto.

Jim elopes with a married woman (Ali Cobrin) and marries her - suddenly. Later she tells her female rival (Hassie Harrison), "It all happened so fast." No kidding.

Jim suddenly becomes a millionaire - huh? Little of any of the events is fully motivated.

Although The Iron Orchard is based on a novel by Tom Pendleton, the screenplay by Gerry Deleon and director Ty Roberts is undistinguished. Much of the dialogue is conventional, trite, and listless.

The characters in the film generally are unpleasant. It's hard to relate to unpleasant dullness.

There are vintage cars. But obviously the owner of one crucial automobile said to the filmmakers, "You can use my car, but don't get it dusty." The environment is dusty, but the car is dustless. The film is without grit.

The direction by Ty Roberts is piecemeal. The acting doesn't hold it together.

An imaginative scene is a spitting contest between Jim and a bewhiskered, old coot. It stands out since it is one of the very few lively moments.

The oilfields in Texas are not what they used to be.