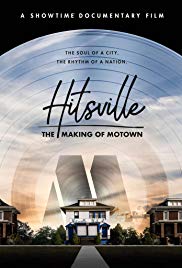 Hitsville: The Making of Motown is an unforgettable paean to creativity.

Following the tracks of recent impressive documentaries about music - The Wrecking Crew (2015), 20 Feet from Stardom (2013), and Muscle Shoals (2013), - Hitsville: The Making of Motown, deftly directed by Benjamin Turner and Gabe Turner, is a wondrous movie. It shines a loving light on the past. And it fills the ears with sublime music.

Employing many interviews with Motown creator Berry Gordy (90 years of age November 29, 2019), and his best friend of 60 years Smokey Robinson, Hitsville: The Making of Motown gives us a personal behind-the-scenes look at the evolution of Motown, from 1959's first headquarters in a house on West Grand Boulevard to the move to LA in 1979, when Motown became an entertainment conglomerate. Motown's influence was world-wide. It was a hell of a trip.

Gordy says that he started as a hustler. He says, "I was a hustler...trying to make money." He was a shoeshine boy and a boxer. Then he worked on the Ford assembly line, which taught him a crucial lesson. "The factory was an important job," he states. He based his company on it. He utilized the concept of an assembly line with different people doing different things.

Gordy was a perfectionist. Smokey tells how Gordy would start with one track. He'd do "327 mixes and use number two."

Gordy tells how other people tried to copy Motown, but "they couldn't get our sound, because the studio was the bathroom upstairs" in the house on West Grant Boulevard.

As a songwriter himself, Gordy emphasized "the simplicity in the music - that people understood." It became a ruling principle for him. He didn't have the talent of some others, but he knew how to bring it out and promote it.

"I really feel myself as a teacher," he says. "Smokey was my first product."

Stevie Wonder says, "Berry could sense what needed to happen to make it pop." Stevie Wonder says that he was "eleven years old when I went to Motown." He played piano, drums, bongos. And, of course, he prevailed.

Hitsville: The Making of Motown emphasizes how Motown served youthful brilliance. In one phenomenal sequence we see Michael Jackson as a 6-year old doing the moonwalk. The photography of the early Michael Jackson shows adorability incarnate and talent supreme.

We also witness a young Michael creating a song on stage at the Apollo Theater.

Hitsville: The Making of Motown is full of interviews with icons, artists, songwriters - a slew of members of the Motown "family." Many people talk about the sense of family that permeated Motown. One woman says that it was "a musical Disneyland."

Smokey says, "We were fiercely competitive against each other. But we helped each other. The Motown family." "Motown is a great example of the American Dream," he says.

We hear how you could see Marvin Gaye in one corner, Smokey, Stevie Wonder, Martha Reeves, et al. At some times it seemed there was more talent in one room than in any other place ever.

But besides the camaraderie, there was conflict. During the 60s and 70s, Gordy wanted Motown to avoid politics. His brand was sacrosanct. But politics and violence were everywhere. Marvin Gaye sought to express his own personal vision about the Vietnam War and social injustice, but Gordy opposed that. Gordy admits to being wrong at times.

Marvin Gaye sang the single What's Going On. He broke free of the Motown brand. Smokey says of the song, "It's more poignant today than it was when it came out." The album with What's Going On as its title song was released the next year. Smokey says, "It's my favorite album."

Part of the film is devoted to the turbulent professional and personal relationship between Gordy and Diana Ross. Footage of Diana Ross is in the film, but she didn't participate in the making of it.

There's a nice sense of spontaneity to the film. At one point Smokey and Berry bet which version of I Heard It Through the Grapevine was recorded first. Both the upbeat one by Gladys Knight and the Pips and the other released by Marvin Gaye were hits. Smokey loses the bet.

The interviews and footage are great supporting characters, but the star is the music.

The music of Smokey Robinson, Martha and the Vandellas, Michael Jackson, The Temptations, Marvin Gaye, Stevie Wonder, Diana Ross & the Supremes, Gladys Knight and the Pips is eternal.

Hitsville: The Making of Motown takes us into the Dream Factory.

There we experience the sweetest of everlasting dreams.