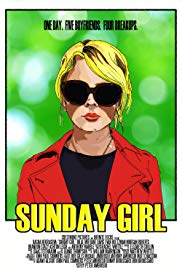 I'm ambivalent about reviewing indies. I often admire the creativity, but I also often cringe at the pretention.

Sunday Girl made me cringe.

Whatever film I watch, I try to get on its wavelength. But I am unable to get on the wavelength of pretentiousness. Sunday Girl has passable direction by Peter Ambrosio, but it has a screenplay - also by Ambrosio - that is contrived and stilted. The acting is erratic and stilted, but even gifted actors would have trouble with the wince-worthy dialogue.

The film begins with Natasha stopping outside the house of one of her boyfriends Victor (Bilal Mir), who is a poet. He's also a loud clown.

He says, "I can poach you an egg if you're hungry."

That dull dialogue may be the best in the scene. He then tells her she is "an earthquake for me," but he is only "a light breeze for you." They're a smog for the audience.

The original music by Isaac Tetenbaum with its pounding piano tries to enliven several scenes. It doesn't.

Sunday Girl is the tale of Natasha who has been dating five boyfriends at the same time. She is breaking up with Victor. She is trying to find herself.

The actress who portrays Natasha has to maneuver through a challenging role. Natasha should been compelling. Or at least interesting. Podcaster and sometime-actress Dasta Nekrasova is negligible. And her character is an empty red coat.

Who is the target audience for Sunday Girl? I thought at first it might be failed parody, but it isn't. Was it Millennial hell? No. At best, it's Millennial Limbo.

I'm afraid the audience for Sunday Girl is Ambrosia's parents and friends. Much of it seems as though it takes place in a mediocre acting class.

Anthony Marble, who plays Natasha's boss, is one of the few actors who seem credible. But he is on screen for a brief time, and fortunately he doesn't have to speak much dialogue.

Carla, her roommate, tells Natasha, that she is "an unbelievable artist." She also says, "You're dating five guys. Unbelievable." Yeah, I didn't believe her either. Her fourth boyfriend Tom tells her, "I didn't get to know you though."

There isn't much to know.