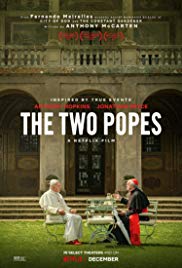 The Two Popes is a Master Class in acting.

Anthony Hopkins as Pope Benedict XVI, and Jonathan Pryce as Argentinean Cardinal Jorge Bergoglio, who becomes Pope Francis, are at the top of their game/ritual. With clever, intelligent dialogue by veteran screenwriter Anthony McCarten, they create chemistry between two very different human beings. The two gifted actors give us spirited performances - a memorable offering of acting souls.

Benedict is conservative, stubborn, and avoids people - he eats alone. Bergoglio is liberal and outgoing. They are a mixture of quality vinegar and quality wine. Bitter sweet.

Bergoglio visits the Vatican in 2012 to personally request his retirement. As both men evolve, they go from being adversaries to a different relationship.

Benedict says, "Change is compromise." He sees the Cardinal as a threat.

But Bergoglio eventually affects him. He has a sense of humor, while Benedict is more straight-laced. Bergoglio tells Benedict, "Remembering jokes is an essential part of Jesuit training." Bergoglio was the first Jesuit to become Pope.

Benedict has his own sources of occasional entertainment. He watches Inspector Rex, the Austrian television series. [It's a charming series.] He doesn't watch football.

But as the two men's relationship grows, together they watch the finals of the World Cup, and root for the opposite sides - Germany and Argentina, and Benedict experiences being a winning fan.

Eventually the Cardinal says, "Truth may be vital, but without love it is unbearable."

He particularly knows the power of love because of his experiences during the "Dirty War" in Argentina, in which he did not make it his primary concern.

When director Fernando Meirelles veers back to that war, the film loses some of its engaging quality. But it recovers it when the two old men reappear.

Anthony Hopkins is the youngest star actor born in 1937. He was born December 31, 1937 and celebrates his 82nd birthday on the last day of the year.

He joins the group of living actors born in 1937. It's a phenomenon. Jack Nicholson, Dustin Hoffman, Jane Fonda, Warren Beatty, Morgan Freeman, Vanessa Redgrave, and Hopkins all were born in 1937. And they all still live.

You and Jonathan Pryce make it a lasting celebration.