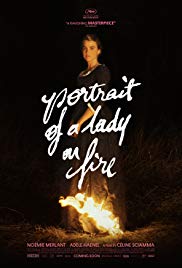 Portrait of a Lady on Fire is a slow burn.

It increases in intensity and depth as it develops. It's not an instant flash fire, but it has the potential to crackle and smolder - and leave an indelible effect in its wake.

Portrait of a Lady on Fire is the story of two women and their multifaceted relationship - psychological, physical and emotional. It occurs in the 18th century on a remote island in Brittany. The ocean roils beneath it.

Marianne (Noemie Merlant) is rowed to her destination and enters a large house. She is met by Sophie (Luana Bajrami), who is the servant. Marianne finds bread and cheese, which shows that she acts independently. Sophie provides her with wine. They eventually become friends.

Marianne is a painter who has been hired by La Comtessa (Valeria Golino) to paint a portrait of her daughter Heloise (Adele Haenel) who is returning from a nunnery. The sister of Heloise has died suddenly, and the mother wants Heloise to replace her to marry a wealthy man in Milan. The painting is to be a gift to influence the man to marry her as a replacement.

The immediate problem is that Marianne can not let Heloise know she is painting her; she is just supposed to be a companion for a while.

Heloise has refused to pose. She destroyed the face of the portrait by a previous painter.

The film is a poignant study of the development of a relationship. It starts with Marianne being careful. And Heloise being almost invisible - her head and face covered. They seem to have little in common. It goes from uncertainty to burgeoning openness to discovery and ultimately to fervent love.

The furtive glances become steady gazes. Marianne is independent, and Heloise sees that as an impossibility for herself given her social status. She was sheltered in the nunnery, and now is vulnerable. She lives in a state of mysterious anxiety. Marianne offers her a new world of thought and a kind of personal freedom.

Portrait of a Lady on Fire was written and directed by Celine Sciamma. Her screenplay won an award at Cannes. It is literate and artful. She makes relevant use of Ovid's Metamorphoses and the compelling myth of Orpheus and Eurydice.

Sciamma uses music brilliantly. Heloise has only heard singing and organ music in the nunnery, and Marianne tries to introduce her to a new experience. On a harpsichord she attempts playing the "Summer" section of Vivaldi's Four Seasons. This sets up a remarkable, powerful conclusion at the end of the film.

Another crucial use of music is the particularly evocative scene when at night by a bonfire a group of village women sing a haunting cappella piece.

The film is full of parts that expand and become clearer. The name of Heloise is not introduced until well into the film, as her character is developed.

Sciamma is aided by the atmospheric cinematography of Clair Mathon. The accomplished painter Helene Delmaire painted the paintings, and we see her hands perfecting the work.

Director/writer Celine Sciamma has a personal, loving relationship with Adale Haenel, the actress who portrayed Heloise. That provides personal creative stimulus. It may remind us of the personal relationship between Swedish director Ingmar Bergman and Norwegian actress Liv Ullmann. Look what they created.

Obviously, Portrait of a Lady on Fire will not appeal to everyone. A reviewer in Texas called it "vapid." Of course, he did. Others may reject the female relationship or the subtitling, or simply the slow burn telling of the story.

For others of us, Portrait of a Lady on Fire expands the art of film.

And the art of living.