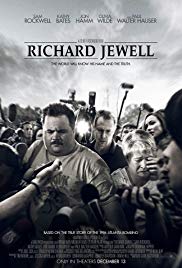 Clint Eastwood's Richard Jewell is coming under a barrage of conflicting reactions.

I'm caught in the middle.

On the plus side, Richard Jewell is Clint's best film in years. It's surprisingly vital and suspenseful. It's audience-pleasing entertainment. Richard Jewell has an overwhelming 97% audience rating on Rotten Tomatoes.

Most of it is a really good film.

Richard Jewell is the story - based on an actual event - of a man who was a security guard in Centennial Park in Atlanta during the 1996 Summer Olympics when a bomb went off. At first he was exalted as a hero, but then he was accused of being the bomber and was hassled by the media and FBI. It was a mental and emotional scourging. Eventually he was proven innocent, but a great toll had been afflicted.

As anyone who reads me knows, I emphasize whether or not a "true story" is told truly.

In Richard Jewell, the main FBI agent Tom Shaw (Jon Hamm) is fictional. Kathy Scruggs (Olivia Wilde) - the journalist or the Atlanta Journal-Constitution - was actual. In the film, an actual figure has a relationship with a fictional one. He is her source, and a sexual relationship is mentioned. That's a bed too far.

In the credits it says some things were changed for "purposes of dramatization."

But by that time, the theater is empty.

Several reviewers have held the changes in scorn. They have accused Eastwood of being a propagandist. Some make nasty ad hominem comments against him.

It's ironic that the film on television in one scene is from Sands of Iwo Jima (1950). John Wayne's politics - like Clint's - were often considered suspect. I didn't share the two men's politics, but I still loved their skilled work. Both men shared credibility on screen. I have a good friend who dismisses both as non-actors and their work as clumsy and wrong-headed.

I met them both, and they were impressive men who emitted a quiet power.

Clint and I once talked about the limited longevity of directors. John Ford made his last feature at the age of 70, and Howard Hawks made his at the age of 74. They then had their careers stopped.

Clint obviously had his own future in mind. At age 89, he has made a film of vitality and power. One comment that Clint made that has stayed with me is when he told me, "I like to surprise people."

Richard Jewell was supposed to be made with Jonah Hill as Jewell and Leonardo DiCaprio as his lawyer Watson Bryant. Instead Paul Walter Hauser plays Jewell, and Sam Rockwell is Bryant. It's hard to believe any other actors could be better.

Hauser's Jewell may drive you nuts as the overzealous and good-hearted man, but his sincerity and vulnerability are believable, and he gets the audience on his side as the system tries to destroy him.

Rockwell is pitch perfect as the independent and heretofore unsuccessful attorney. Kathy Bates is effective as the devoted mother, and Nina Arianda adds a natural human decency as Bryant's secretary.

Jon Hamm is convincing as the over-committed FBI agent, who is anxious to succeed. He tells Kathy, "I think I was made for something better." She shares that quest. They hope for an important, interesting major case. They get one and take advantage.

Richard Jewell does not portray Kathy Scruggs as troubled as she may have been in real life. Her brother has been quoted as saying, "I loved Kathy, but she was crazy."

In the film Olivia Wilde portrays her as an aggressive reporter, who is out to get the story and doesn't care about being popular.

I would guess if Eastwood and screenwriter Billy Ray could change it, they would not portray the rigged relationship between Shaw and Scruggs.

At the end, on screen it says that Jewell died at the age of 44. It does not mention that Scruggs died at age 42. Their focus is on Jewell.

Two people that were unethical are not mentioned in the film. Dave Kindred in his newspaper column related Richard Jewell to serial killer Wayne Williams. And the egregious Nancy Grace, an Assistant DA, said on television that Jewell did not deserve presumption of innocence. Neither is mentioned. Scruggs carries much of the weight of responsibility in the film.

Also not mentioned is an ABC poll taken a month after the bombing in which 69% thought the media treated Jewell unfairly. Only 25% thought they treated him fairly.

Some viewers see Eastwood as a propagandist. The general public doesn't seem to.

Those who appreciate a good story - well-told, with fine acting, a solid screenplay, and skillful artistry seem to be transcending the disturbing misstep in the treatment of Kathy Scruggs. They appreciate Richard Jewell.

They are responding to the humanity in the film.

For the vast majority of moviegoers, Clint Eastwood is a positive force.