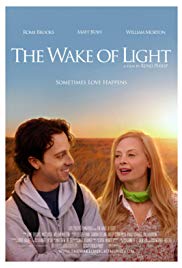 The Wake of Light is what an indie should be.

It's uneven, but it is generally effective, and it shows that the filmmaker has solid potential.

The Wake of Light - produced, written, and directed by Renji Philip - is an appealing character study that features the evolution of the three main characters.

Mary (Rome Brooks) and her father (William Morton) live together in a house in rural, western surroundings. He had a stroke after his wife died, and his daughter is dutifully taking care of him. He is mute and stolid.

She sells water to people on the street in town. She gets it from a well that produces exceptional water. But she and her father are caught in a lifeless routine. They are ruled by the clock.

Then onto the scene comes Cole (Matt Bush), a wandering traveler, and they all undergo major changes.

When Cole arrives, he invests the film with vitality and natural verve.

It's often said that an actor can improve the actors around him. Matt Bush is that kind of actor. In the mediocre beginning of the film, actress Rome Brooks seems like a third-rate Sondra Locke. Bush helps raise her performance.

He gives his character several gestures, which seem genuine. Cole is something of a chatterbox, but Bush makes him personable and credible.

Renji, keep Matt in your films.

Philip's direction also has a natural quality which is the strength of both director and actor.

The film has two liabilities. The major one is the endless music by composer/pianist Josh Kramer. It soaks the film. It's too constant and endless. It hardly ever stops.

Philip's dialogue hums by itself. But he tends to undercut it with easy, artificial lift. His characters and their actors don't need this. What does Kramer have on you, Renji?

I'd like to see Renji Philip make a movie without music.

The second liability is the hammy performance by the actor who portrays the afflicted neighbor. His performance jars against the other credible ones.

Director Philip does something at the end that is easy to miss. He can be very subtle, e.g., Mary drops a symbolic object at the end.

If Renji Philip retains his sense of the natural, and trusts it more, the light will grow.

If he keeps Matt Bush and Elizabeth the rabbit, he'll be fine.