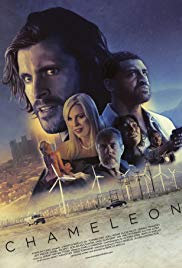 Marcus Mizelle is a man for all seasons - and then some.

He seemingly participates in every single aspect of his indie film Chameleon. Mizelle is producer, director, writer, co-cinematographer [with Victoria Stein] and editor.

Mizelle is even post-production supervisor. At least, he's no actor. Wait a minute. Mizelle is listed in the acting credits as the delivery man. He's everywhere.

But despite his omniscient skills, Mizelle is not much of a money-raiser. Much has been made about the extremely low budget that went into making Chameleon.

However creativity and vision are not matters of budget. A multi-million dollar film can be a dud, while a low-budget project - such as Chameleon - can be impressive.

Mizelle did get some significant creative help. Jeremy Nathan Tisser and Jamie Hardt should get major credit. Tisser composed the music, and Hardt honed the sound. Hardt is a veteran sound editor, designer and sound mixer, who worked on Zero Dark Thirty (2012), which won an Oscar for Sound Editing - that film's only Oscar.

Tisser's music is effective, but is not intrusive, and Hardt makes the most of helping mix and edit sound in different locations.

One thing that separates Chameleon from other indies is the attention to sound. There are sounds of ocean surf, traffic (punctuated by sharp musical notes), a train coming into a station, a door shutting, wind blowing, a gun being kicked across the ground, bare feet running on pavement. It's an aural experience.

Mizelle is able to set his film in various locations, which gives it a scope that a low-budget film generally wouldn't achieve.

Mizelle's screenplay is conventional, but has some twists.

The basic plot of Chameleon is that Patrick (Joel Hogan), a petty criminal, is paroled and goes back to Los Angeles to work at small jobs. He gets a call from a former prisoner Dolph (Donald Prabatah), who wants Patrick to partner up with him on money-making crime. They decide that the handsome Patrick will create relationships with the young wives of rich men, and Dolph will kidnap the women.

Patrick then will contact the husband and tell him that he was having an affair with the man's wife and she was kidnapped. He will say he's desperate for money to pay off the kidnapper. Of course, plans go awry.

Some sequences are better than others. Mizelle relies on narrations of the kidnapped women after their return. They are alone on screen talking to the investigators off-screen. The film starts with Patrick talking to a parole official off-screen. It's a technique that is a bit lackluster.

At times, watching Chameleon one has to suspend disbelief. The rich husbands are too compliant - at least one should balk.

The actors Mizelle has assembled make an able cast - they seem professional. Some of the characters lack depth and individuality. The African-American Dolph is an example. He is a cruel and conventional staple. But actor Prabatah makes him convincing.

Joel Hogan is plausible as Patrick, and Alicia Leigh Willis is effective as the formidable Rebecca.

Chameleon is well-made, and has an ending that is unique and avoids convention.

Chameleon may not be a diamond in the rough, but it is a polished indie.