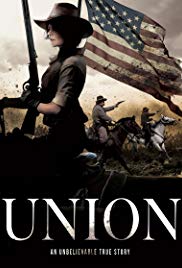 In the indie movie Union, an old Indian tells children a tale about their relatives during the Civil War, and talks about a "shape-shifter."

It turns out the ultimate shape-shifter in Union is Whitney Hamilton. She is director, writer, producer, editor and lead actress.

Her shape-shifting is convoluted. She tries to be lyrical in her film - Dances with Foxes? - but Union is as much hodgepodge as a poem.

Hamilton draws from the fact that 400 women fought in the Civil War pretending to be men. Initially Union seems like a clever, interesting concept.

The plot tantalizes before stumbling. When Henry, the brother of Grace, is killed in the war, Grace (the ubiquitous Whitney) assumes his identity behind false whiskers. She in turn is almost fatally wounded in a battle. Being held in confinement she recovers, nursed by Virginia (Virginia Newcombe).

She escapes, but is hunted by Northern soldiers for shooting an officer.

Meanwhile back in her spider's web home, Virginia is trying to keep the farm she inherited. She also is mourning the loss of her husband and son who were killed by Northern troops.

Henry seeks her out.

The relationship between Henry and Virginia unfortunately becomes tiresome. It's probably unfair to compare the lesbian relationship in Union with the one in the masterly Portrait of a Lady on Fire. The latter was touching and credible. The one in Union is not.

I guess one of the themes is that the Civil War made some people gay. Who knew?

Hamilton has a cast that is able, but clarity is not her strength.

Hamilton is too ambitious, which leads her into splurges of self-indulgence.

She does have a strong sense of scope, but her film turns into an ordeal. It would be much stronger if it were leaner and more focused.

An outside editor might have been the biggest help. The editor could have provided perspective, and might have avoided pretension and haphazard disconnection.

One can applaud Whitney Hamilton for her audacity - it is her strength.