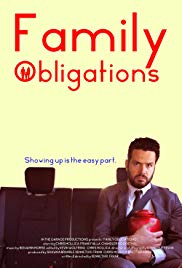 Family Obligations begins with a figure who keeps his distance. Peter Steele (Chris Mollica), the main character, has lived his life avoiding connections.

When his father suddenly dies, he is thrust into an uncomfortable situation. He has no relationship with his father. Peter hasn't seen him for years.

Peter's eulogy in a church with few attendees is one sentence. "David Steele was my father."

Peter seems diffident, but writer/director Kenneth Frank is going to offer him challenges. When Peter leaves the church and is driven away in a limousine that goes over bumps, he tries to put a seat belt around the urn carrying his father's ashes. It's an absurd moment.

This film, although low-key, is going to take us on a unique ride. Director Frank establishes a natural humanity, but it has its moments of absurdity. The tone is sprightly, and occasionally droll.

Peter has to replace his father as his Uncle Frank's (Frank Failla) driver to the hospital for his regular appointments. He finds out that Frank has terminal cancer. But like a stereo-typical New Yorker, Frank is blunt, dismissive, and annoying.

He also is seemingly fatalistic. He just wants to simmer in his bile. But Peter stays around.

Peter meets Melanie (Chandler Rosenthal), a single mother who lives in the same building as Frank with her young daughter (Eleanor Brandle-Frank), and like Frank struggles with her life. But she too accepts it.

Peter has accepted the routine status of his life, but is affected by the people he has just met. He is faced with change. He remains uncertain in his social life, but evolves.

Kenneth Frank's dialogue has its charm and seems genuine. Much of the dialogue is about the characters trying to deal with their circumstances.

Peter says to Melanie about Frank, "... I don't think he wants me."

She answers, "That means he probably needs you more."

The actors capture the humanity of their characters. Both Melanie and Frank are memorable characters with troublesome pasts. And Peter grows to understand his own. The actors make the characters prevail.

If I were advising indie filmmakers, I'd suggest they emphasize credibility. Many of the indie films I see lack it. The best are credible.

Family Obligations could well be the poster movie for indie credibility.

It presents us believable humanity with a touch of absurdity - and credibility.