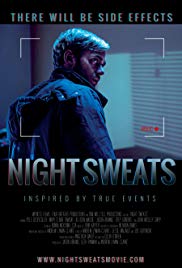 When the indie Night Sweats opens, it seems like it's going to be amateurish. A young man (John Francomacaro) stumbles out of a building experiencing great distress. He is having a fit.

A scene which should be compelling is awkward and not convincing

There's also an early scene of a group of young people gathering together, which has little if any effect. It is dull and conventional.

Early on, it looks as though Night Sweats is going to be an amateurish venture.

But then it's saved by the main actor Kyle DeSpiegler who carries it withstyle. He has a natural, boyish quality, which features a puzzled but serious expression. [Perhaps a touch of Tony Perkins.] His performance is the most consistently credible thing in the movie. Also contributing natural quality to the film is actress Allison Mackie, who portrays a medical examiner.

DeSpiegler plays Yuri, who has moved to New York City from Colorado. Yuri becomes obsessed with an insidious Self Help outfit and their client, a mysterious pharmaceutical company. They are somehow involved with a unique disease that came from Brazil. [Not exactly a comfortable topic in 2020.]

As the head of the Self Help organization (John Wesley Shipp) says to Yuri, "This city is a cauldron for trauma."

Yuri also is attracted to Mary Kate (Mary Elaine Ramsey), who has a magnetic effect on him.

Together they try to resist the trauma around them.

Actress Ramsey is capable, but she lacks the depth that might individualize her character. Her character could use more intrigue. And possess a greater wallop.

The relationship between Yuri and Mary Kate has minimal chemistry.

They are not helped by some of the dialogue credited to director Andrew Lyman-Clarke and writer Seth Panman.

Yuri says to Mary Kate, "I fucking work at a coffee shop."

John Kaefer's music is evident throughout, but is better in the latter portion of the film.

Night Sweats wobbles at the beginning, but gains equilibrium. It concludes with power.

Kyle DeSpiegler carries much of the film with his naturalness, but then director Andrew Lyman-Clarke takes over.