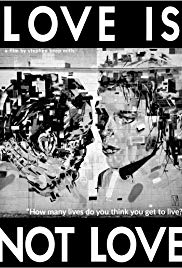 Love is Not Love is a movie to grapple with.

To understand this indie movie, you have to get on its wavelength. That is not an easy task. It takes patience and trust.

One frustration for filmmaker Stephen Keep Mills will be that his film will be misjudged by undiscerning viewers. It's certainly not for everyone.

Stephen Keep Mills is a student of the 1960s. Born in 1947 in South Carolina, he attended Columbia University in New York 1965-1966. He then got his MFA from the Yale Drama School.

Love is Not Love could be titled La Dolce Vita in America. Fellini's influence on Mills is palpable.

And one should approach Mills's Love is Not Love as he or she approached Antonioni's L'Avventura (1960). It is L'Avventura Amore.

One also may recognize some of the qualities of '60's filmmakers John Cassavetes and D.A. Pennebaker. It was a fertile time.

In some ways, Love is Not Love takes us back to that time. We follow Frank (played by director/writer Mills) on a quest for love. His odyssey begins on the streets of New York City. Almost immediately we realize we have to suspend our disbelief. The streets there have a crush of crowds spouting dialogue about sex and oddity.

Frank goes to meet a younger female escort in her room. They both speak of their torrid relationship. Has Frank found his love? He returns, but eventually love vanishes and she is obsessed with getting a good review on social media.

Frank winds up back in California with his wife Paula (Louise Martin). They have two unseen grown children, although Frank has told the escort he has none.

Frank and Paula bicker and squabble. Their marriage is a bad situation comedy. But at times they also settle for a moment and converse seriously. In one conversation Frank mentions movies Rosemary's Baby (1968), Psycho (1960), and El Topo (1971), and directors Sam Peckinpah and Sergio Leone. In another, the couple discuss an upcoming NHL game between the Sharks and the Kings (another duality).

Ultimately Frank tells her he is glad he married her.

But she does not end his quest.

At the end he is alone.

Pursuit is perhaps the major theme of the film. Frank says to the escort, "I'll keep pursuing and see what I can do." A female narrator says, "There is no destination, only pursuit."

Mills is intelligent, educated, and knowledgeable. He references myth. He is aware of the value of language. Pretension, even if intended, is still pretension. Many audiences won't have the patience.

Mills is aided by the black and white cinematography by Steven Fadellin. It creates evocative mood and atmosphere. It brings clarity to what at times may seem garbled.

Ultimately, whatever the response, for better or worse, Mills has made his magnum opus.

He can stop pursuing.