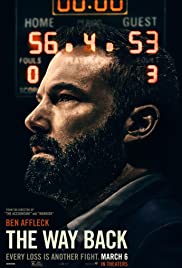 The Way Back is not only a soap opera - it's a beer opera.

And too much of the beer is flat.

From the start, we know that we're not in the hands of an original director. Or writer.

The film begins listlessly with footage of Jack Cunningham (Ben Affleck) outdoors at work, then driving, at a bar, and taking a shower with a beer can in his hand.

Director Gavin O'Conner loves showers scenes - he has three of them. They're all the same. He also has a redundancy in his basketball scenes.

The Way Back is the fictional story of Jack Cunningham, who is suffering over the past death of his young son. Jack is an alcoholic - in one scene lacking any subtlety - he drinks most of the cans of beer in his refrigerator.

Suddenly he is offered the head coaching position at the Catholic high school where he was the biggest star. His uniform hangs on the wall of the field-house.

The priest who tries to hire him doesn't even know about the death of the son of the school's all-time star. In what world?

The cast is able, but they aren't given much character to work with. As an actor, Affleck can draw on his own personal travail, but Jack Cunningham - like all the roles in the film - is a sketchy character.

His sudden walking away from a college scholarship and dropping basketball is thrown in - the motivation has no substance. And, his going back to coach doesn't fit the character as presented.

Never has drinking been so listless.

Madrigal is solid as the mathematician/assistant coach. But the women are interchangeable, and the players on the team are one-dimensional, if that.

The only thing unique in the film is the abundant cursing - among the most in any sports film. But it's also just tossed in. It starts to be a theme, then lapses.

But don't worry. The screenplay employs some tried-and-tired conventions. Lo and behold, the father, who has ignored his son's basketball playing, shows up at this last game. Who knew?

Director O'Conner relies on music throughout. His use of music is intrusive, not evocative. His dependence on piano is like dull dribbling.

The Way Back is way, way, way back.