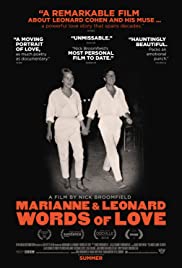 A film may be a "true story," but what matters is whether it is truly told. A true story falsely told is not true.

The documentary Marianne & Leonard: Words of Love is about two actual people - Norwegian Marianne Ihlen and Canadian songwriter/singer Leonard Cohen. She became his "muse." The film, directed by Nick Broomfield, is truly told up to a point. But trying to capture truth can be mercurial - like trying to quell quicksilver.

It's very difficult to capture the essence of people. In Marianne & Leonard: Words of Love, through images and words, we continually are told that Marianne and Leonard were special people. Several participants declare that. But Marianne, despite the outpouring of praise, seems an attractive, rather ordinary woman. She was more than that, but how do you express that beyond the limitations of image and word?

I once knew a woman who was the most intuitive person I ever met, but that's a feeling. I couldn't prove it. The film doesn't prove Marianne's quality. It just tells us she had one.

The film also says that Leonard Cohen had a special quality with women, that bowled them over again and again. It's credible, but again we just have to take their word for it. Perhaps we believe it, but we don't experience it.

It's like seeing a lightning bolt on screen, and hearing distant thunder, but not being there participating. It's not the true experience. It's a simulation.

Marianne & Leonard: Words of Love is a character study and a love story. They met on the Greek island Hydra in 1960, and began a relationship that careened for the next 56 years, until they both died in 2016. Marianne suffered a lot, but married (the same man twice), and Cohen had a lifetime of romantic relationships as he sought the essence of love. Despite its punishing fissures, there was an unbreakable bond between them.

Marianne & Leonard: Words of Love shows many contradictory Leonard Cohens: the tormented poet, the manipulative egotist, the mournful singer, the vulnerable vagabond, the spiritual seeker. [He spent more than five years in a Buddhist monastery in California.] He's a litany of characteristics.

Director Nick Broomfield had a brief relationship with Marianne, and he obviously was smitten with her. In the film he's present, but stays in the distance. He has compiled footage - even using master indie director's D.A. Pennebaker's cinematography of Marianne when Pennebaker was in Hydra a year before Cohen.

Broomfield also is aided by articulate participants in the Leonard/Marianne legend. Among them are the couple themselves, Broomfield himself, guitarist Ron Cornelius, road manager Billy Donovan, Irving Layton - friend of Cohen and his expressive one-time partner, Aviva Layton, Helle Goldman - Marianne's friend, and Jan Christian Mollestad - who was present at the death of Marianne. It's an impressive assemblage.

Judy Collins also appears and still seems in awe as she talks about meeting Cohen, singing his songs, and finally introducing the nervous songwriter to sing on stage. She sparkles when she talks about him.

But Marianne & Leonard: Words of Love stays pretty much on the surface, as it tells its story. If image and words can't get beyond the surface, what can?

What can and does is Leonard Cohen's music - it's a language beyond words. Music transcends the earthbound couple.

Leonard Cohen's music can do that.

If Robert Altman's McCabe and Mrs. Miller (1971) didn't have Leonard's music, it wouldn't have its soul.

After completing shooting by the masterly cinematographer Vilmos Zsigmond, Altman contacted Cohen. He suddenly knew that without recognizing it, Cohen's music had influenced his vision. He decided to use three of Cohen's songs in his film - The Stranger Song, Sisters of Mercy, and Winter Lady.

The music fulfilled the feeling the movie had hinted at. It had evocative truth.

When Leonard Cohen sings in Marianne & Leonard: Words of Love. he captures that truth.

It's a glimpse of a prayer.